Turkey’s budget outlook is better off than the U.S. 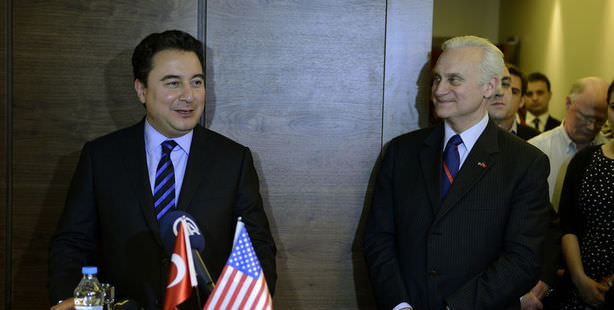 During an address for the opening of the new Fulbright office in Ankara, Deputy Prime Minister Ali Babacan stated that when compared to the U.S. budget, Turkey’s budget outlook is better off and said, “Turkey is now focusing its foreign aid distribution to other nations on education and health services.”

Deputy Prime Minister Ali Babacan delivered a speech at yesterday's opening of the new office for Turkey's Fulbright Education Commission in Ankara. During his talk, Babacan recalled how 20 years ago he applied for a scholarship in the former Fulbright office. Babacan said that when he stepped foot into the office at that time, he thought, "I wonder if they have enough money to send all of us to the United States?" Babacan added that of course, they did pay for his scholarship to the states.

Babacan emphasized that first and foremost the United States and Turkey are partners, allies and friendly nations that uphold the same values and share the same principles of spreading these values throughout the world. Pointing out that the United States and Turkey collaborate on a number of international issues, Babacan went on to state the following:

"No matter how far our geography may be from one another, when it comes to the global issues that involve us we are extremely close. We are extremely pleased with the close collaboration between our two countries. President Obama described the cooperation between our countries as a partnership that is exemplary for other nations. When I was the Foreign Minister, I met with Hillary Clinton who told me that there were a lot of similarities between Turkey and the United States. One of these similarities is the sentiment of global responsibility. It is this sentiment that brings our countries closer together. Turkey and the U.S. also have strong tradition-based relations in a number of areas including defense and security. We have been exerting significant efforts more recently in order to further develop our trade and economic relations. We are working on establishing a new structure in order to do so."

Babacan went on to express that both culture and education are areas that have had the longest influence in relations between the nations, and as a result the Fulbright Commission has had a significant influence for many years.

Expressing how pleased they are that the program is expanding, Babacan stated, "The year that I applied for a Fulbright to do my MBA, only 12 applicants were selected. I am extremely happy to hear that this year that number has gone up to 60. This means the number of recipients has multiplied by five times. We are extremely proud of the contributions Turkey makes to the program and that the U.S government sponsors the program. Turkey's foreign programs are also progressing extremely fast. Last year, the official development aid that Turkey offered to other countries reached 2.5 billion dollars.

When Turkey's budget is compared to the United States budget it appears to have a better outlook. The aid Turkey makes to other nations is now focused on education and health services. The Fulbright program began in Turkey in 1949. The first group of students went to the United States in 1951. Turkey has also hosted a number of Americans through the Fulbright program. U.S. Ambassador Ricciardone also went to Italy with the Fulbright program. I believe that this experience, based on the essence of international relations, makes a great contribution to bilateral relations."

Explaining that this was one of the factors that influenced him to accept the Fulbright scholarship, Babacan stated, "The orientation provided at the start of the program was extremely beneficial in allowing us to become accustomed to the country. Throughout the program, the Fulbright Commission in Ankara continuously offered us support. During the program, I discovered that Fulbright was actually a network spread throughout the world. I have met with others that have received Fulbright scholarships in my travels to a variety of countries throughout the world. I feel that this network makes a great contribution to the world. I believe that this office, which is situated close to both Bilkent and the Middle East Technical University, will be a place where extremely productive work will be done."

"The Fulbright program changed my life"

"For years, the Fulbright exchange program has had numerous success stories. I think Mr. Deputy Prime Minister Babacan may be one of the best such examples. I believe that these programs offer the best way to get to know magnificent cultures and people. The fact that the United States has allocated nearly a million dollars, during this time when our budget is tight as stated, is clear proof of the importance placed on the Fulbright program." Ricciardone commented on the great contribution the Turkish government has made to the Fulbright program and also expressed that the exciting joint program ongoing with the Scientific and Technological Research and Council of Turkey (TÜBİTAK) will result in a whole new era of relations between Turkey and the U.S. in further generations.