An olive branch from Gaza for freedom and peace 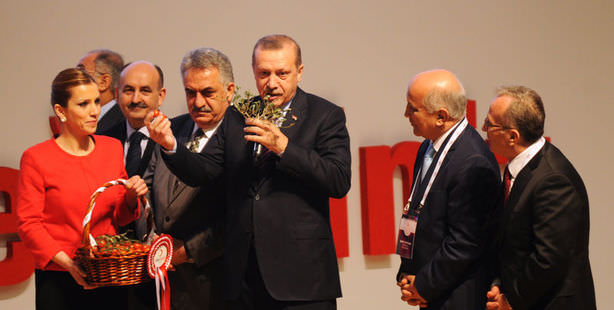 While attending the opening of the Turkish Red Crescent Society General Assembly in Ankara Prime Minister Erdoğan praised the organization for its successful efforts.

Prime Minister Recep Tayyip Erdoğan was overwhelmed with emotion when he received the gift of an olive branch and tomatoes sent to him by Palestinians from Gaza.

"These olives that were planted there represent the sound of freedom. Hopefully Gaza, from where these olive branches hailed from, will reclaim its freedom as soon as possible," said Erdoğan who then asked if the tomatoes brought from Gaza had been washed. When the female authority who brought the prime minister the basket of tomatoes said "no" Erdoğan proceeded to hold up both the tomato and the olive branch for photographers.

The Turkish Red Crescent Society delegates reelected Ahmet Lütfi Akar as president during an election held at the General Assembly.