“Justice is necessary for happiness” 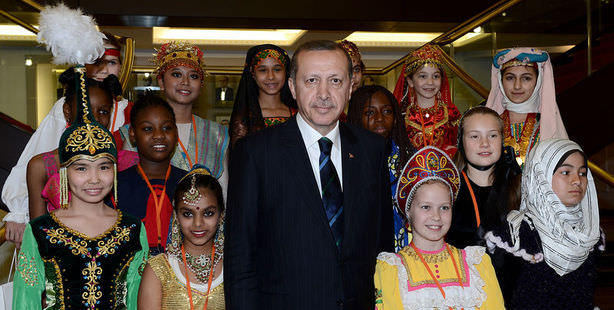 Prime Minister Tayyip Erdoğan welcomed children from all over the world to the Prime Ministry in Ankara on Wednesday as part of the festivities held for April 23rd Children’s Day.

Welcoming a delegation of children from all over the world to the Prime Ministry as part of the festivities for April 23rd Children's Day, Prime Minister Tayyip Erdoğan stated, "We want our children to reside in a peaceful and cheerful world that is absent of war, combat and conflict."

Addressing the delegation of international children, Erdoğan said, "We are all members of a big family of humanity." Remarking on the importance of justice in the world, Prime MInister Erdoğan went on to state the following: "Justice and spreading the love amongst people are the most important conditions to establishing world peace. There is enough happiness in the world for all of us. If there is justice, sharing and solidarity then our world will be like a heaven where all children can live in peace."

After a group photograph was taken, Esra Sellum, an 11-year-old Syrian who is staying at the Harran Refugee Camp, read a poem she had written about Turkey. Erdoğan was visibly moved by the poem penned by Sellum, who escaped Idlib a year and a half ago with her mother to seek shelter in Turkey. Sellum's father is being held captive by the Assad regime.