Interior Minister: Chechen suspects have no connection to Turkey 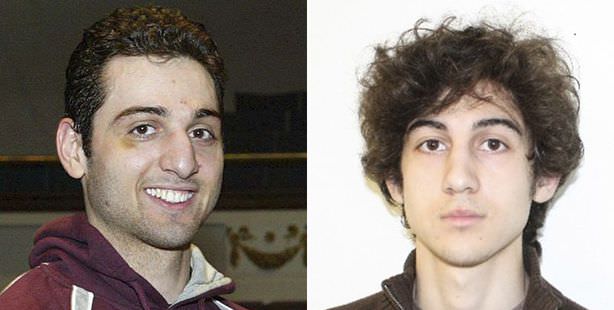 Interior Minister Muammer Güler told a news conference that one of the Chechen native suspects in the Boston Marathon bombing came to Turkey once, on July 10, 2003 and left ten days later.

Speaking to reporters, Interior Minister Muammer Güler announced that the two Chechen suspects assumed to be responsible for the Boston Marathon bombing, "had absolutely nothing to do with Turkey."

When the identities of the two suspects in the devastating Boston Marathon bombing and subsequent murder of an MIT police officer and critically wounding another officer, were revealed, allegations also surfaced that they may have entered the United States from Turkey. In order to respond to these claims, Interior Minister Muammer Güler held a news conference at the Swissotel.

Explaining that one out of the two brothers believed to be connected to the Boston bombing, Tamerlan Tsarnaev, who was born in 1986, arrived to Istanbul on a Kyrgyz passport with three other individuals that had the same surname on July 9, 2003 and departed from Ankara on July 19, 2003, Güler stated, "We believe they were a family. We have established that they had absolutely no connection whatsoever to Turkey.'

Minister Güler said that they had obviously been closely tracking the developments in which American police staged a widespread manhunt to track down the younger brother Dzhokhar Tsarnaev, after a shoot-out with security officers resulted in the death Tamerlan Tsarnaev. Güler said that upon hearing that certain news reports were claiming the brothers entered the United States from Turkey; they immediately ordered a thorough investigation into the matter.

Güler described the results as following: "The older brother Tamerlan Tsarnaev, who was born in 1986, entered Turkey on a Kyrgyz passport on July 9, 2003. It has been understood that he departed from Ankara ten days later, on July 19, 2003. Dzhokhar Tsarnaev, the younger brother who was apprehended alive, has absolutely no record of having ever entered or departed Turkey," stated Güler.

'In addition, Tamerlan Tsarnaev was accompanied by three individuals; Bela, born in 1988, Aleyna, who was born in 1990 and Maret, who was born in 1967, which all shared the same surname and entered Turkey on July 9, 2003 and departed Ankara on July 19. We therefore believe they were members of the same family. We have established that they have absolutely no connection to Turkey. I am relaying this information to you in response to reports that have surfaced claiming otherwise. In other words, with the exception of a ten-day visit by one of the brothers ten years ago, there are absolutely no other records or connections made with Turkey by the suspects. I want to especially underline the fact once more that ten years ago, in 2003, Tamerlan Tsarnaev, the suspect who was apprehended dead, came to Turkey for a period of ten days and then departed,' stated Güler.

Interior Minister Güler went on to reiterate that there are absolutely no records of the youngest brother, who was at large until Boston police apprehended him late Friday, Dzhokhar Tsarnaev having ever entered or exited Turkey.

"Certain reports being made on American television stations and internet websites have made various allegations, such as that they resided in Turkey or entered the U.S. from Turkey, This is not the case. In addition, our security officials have shared this information with FBI and American authorities," concluded Güler.
Last Update: Apr 20, 2013 8:26 am