Assistance for Syria to be channeled through a single body 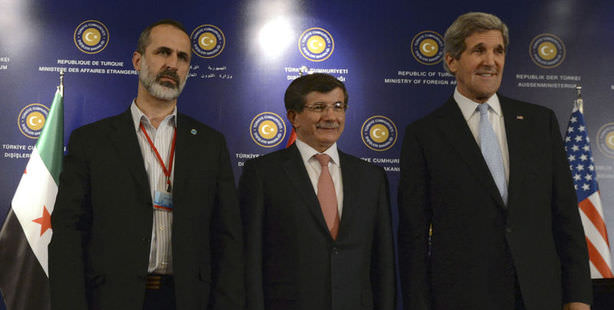 A declaration released following a Friends of Syria core group meeting of the Syrian opposition and its 11 foreign supporters stated that all future assistance will be channeled through the insurgents’ Supreme Military Council.

A Friends of Syria core group meeting held for six-hours on Sunday in Istanbul may not have reaped a consensus on a concrete action plan, however a declaration released by the Syrian National Coalition announced that the main opposition and its 11 foreign supporters have agreed that all future assistance will be channeled through the coalition's Supreme Military Council, affirming the official recognition of the opposition's organization within Syria.

Although no specific course of action was taken against Syrian President Bashar al-Assad, a joint announcement also made by the core group of 11 foreign ministers stated, "Should the Syrian regime reject this opportunity, we will be expanding our assistance and will be making additional announcements."

TIME IS OUR ENEMY: During the opening address, Foreign Minister Ahmet Davutoğlu called on the core group members to take concrete action, a notion that U.S. Secretary of State John Kerry backed during the meeting by stating, "Time is our enemy. Every moment that passes only strengthens the opposite side's hand."

THE WESTERWELLE CRISIS: While Qatar's State Minister for Foreign Affairs Halid Bin Muhammed Al Attiyan stated, "We have to do whatever it is we are going to do before it is too late," German Foreign Minister Guido Westerwelle expressed his concern prior to the start of the meeting by stating, "Measures need to be taken against radical oppositionists. Where is this aid going? We must prevent this aid reaching the hands of extremist forces and terrorists. The empowerment of radicals also poses a threat to the region," said Westerwelle who also commented that Berlin may have to consider lifting the EU arms embargo on providing weapons to Syria.

A WEAPONS SAFEGUARD: The Syrian opposition responded to the west's concerns with a declaration which stated; "We guarantee that weapons will not pass into the wrong hands. Once the revolution is over all weapons and armament will be handed over to the related establishments. The administration that will be established will not use chemical warfare."

WE HEAR YOUR CRIES: Davutoğlu responded to a series of emotional statements by Moaz al-Khatib, head of the Syrian National Coalition, who has supposedly submitted his resignation. "At short notice, everyone has cancelled their own personal programs in order to be here. The Saudi minister is even here, which means he is unable to participate in his own daughter's engagement party. We know your laments. I wish you had attended our closed meeting so you could have heard all of our concerns," said Davutoğlu, calming al-Khatib.

For the first time, the 11 ministers who attended the Core Group meeting signed on to a joint announcement. This was also the first time they committed to increasing non-lethal military aid. The decision was reached to channel all assistance through the opposition's Supreme Military Council. This decision also works to ensure that assistance will not go to the wrong hands. Measures were also taken against radical organizations such as the Al-Nusra front. The coordination center for the delivery of assistance will be based in Gaziantep. While the anticipation for a political solution to be reached within the Geneva Convention framework was announced it was also requested that the transition process began immediately.

TO ASSAD: HAND OVER YOUR AUTHORITY

The most critical item in the joint statement released following the meeting was altered late last night, marking the first time the announcement that Assad no longer has a future has gone down in records. The joint statement reiterated their firm support for a political solution to the conflict in Syria being reached within the framework of the Geneva communiqué and stated, "Bashar al-Assad and his close associates have no place in the future of Syria and it is essential they cede power to a transitional executive body."

During the second half of the meeting, SNC head Moaz al-Khatib delivered an emotional address during which he stated, "While I speak to you here, people's throats are being slit and women are being raped. I can no longer sleep at night."