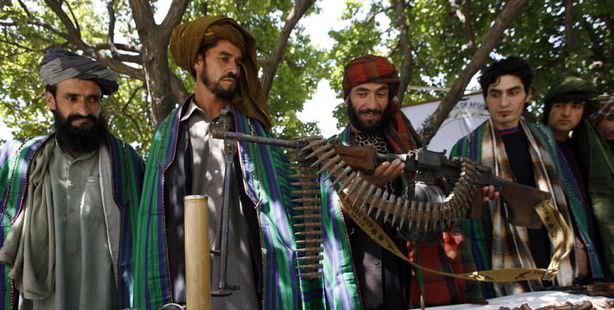 Taliban militants have abducted 11 individuals, including eight Turkish engineers, who were aboard a helicopter forced to make an emergency landing due to bad weather conditions in the Azre district of Afghanistan’s volatile eastern province of Logar.

The radical Islamist Taliban organization has captured 11 passengers: eight which are Turkish engineers, a Russian national and two Afghanis, who were aboard a helicopter forced to make an emergency landing in the volatile eastern Logar province of Afghanistan.

An official from Afghanistan's Ministry of Defense Brigadier General Abdul Qader Asina announced that a civilian helicopter made an emergency landing in the Deremengel region of the Azre district located in Logar at approximately 16:00 on Monday due to bad weather. Logar Deputy Police Chief Rais Khan Sadiq Abdurrahimzey said a significant number of police officers were sent to the region where the helicopter landed, which is under the Taliban's control. The Logar deputy police chief also said that militants for the Hizb-i İslam movement were also prevalent in the region.

Company officials from Khorasan Logistics have confirmed that an MI-80 aircraft belong to the firm, was forced to make an emergence landing due to harsh weather conditions. According to the officials, there were 11 on board the chopper, eight of which were Turkish engineers and the remaining Afghanistan and Russian nationals. The officials stated, "The eight Turkish engineers in the helicopter worked for the MT construction company. The engineers were returning to the capital Kabul after inspecting work on construction sites in the Host province." Reassuring that the passengers who were abducted by militants are in good condition, the Khorasan officials say they are in constant communication with Logar authorities.

Khorasan Logistic firm also said that they have spoken with the Logar District Council Chairman Abdul Veli Vekil and that opinions leaders have been sent to the militants' location in order to mediate the release of the passenger and crew aboard the helicopter. Releasing an announcement on the development, Afghanistan Interior Ministry Spokesman Sıddık Sıddiki said that they are continuing to investigate the issue. NATO's International Security Force (ISAF) Spokesman Günter Katz stated that they will be assisting Afghani security forces on the matter and have already sent police teams to the region.

TALIBAN: WE HAVE TAKEN SOLDIERS HOSTAGE

Taliban spokesman Zabihullah Mujahid said in an emailed statement on Monday, "Mujahideen immediately surrounded the chopper, detained the foreigners aboard and completely destroyed the helicopter by setting it alight." He said nine Americans wearing military uniforms and two translators were inside, however the passengers were denying that they were U.S. soldiers. Statements about security incidents from the militant group often prove to be inaccurate.