Turkey signs on to a joint destiny with Shanghai 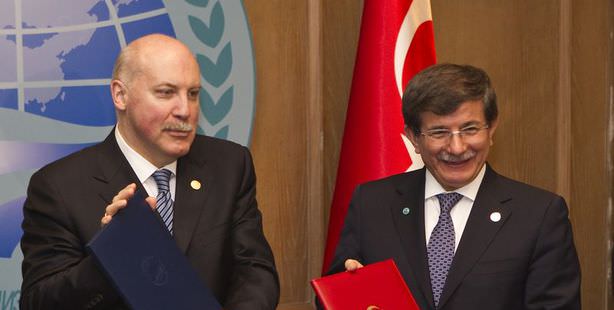 Foreign Minister Davutoğlu signed Turkey on to become a “dialogue partner” with the Shanghai Cooperation Organization on Friday, which is considered to rival the EU. Davutoğlu qualified the development as not only being the declaration of a shared destiny but also as being the start of a long road they will embark on together.

Foreign Affairs Minister Ahmet Davutoğlu signed Turkey up on Friday to become a "dialogue partner" with the Shanghai Cooperation Organization (SCO), a security bloc dominated by China and Russia.

Davutoğlu referred to the signing of a memorandum of understanding as not only being the declaration of sharing the same destiny but also as being just the beginning of a long road, they will walk together "hand in hand and shoulder to shoulder".

The MoU signing took place on the sidelines of the third Istanbul Process Ministers' Conference which aims to adopt new security-increasing measures for stability and security in Afghanistan as well as to strengthen regional cooperation and was held on Friday in Kazakhstan's commercial capital Almaty.

Speaking at the conference, in which the opening address was delivered by Kazakhstan President Nursultan Nazarbayev, Davutoğlu stated that Afghanistan is now facing a critical stage in its history with the ongoing peace efforts between the government and the Taliban, the upcoming 2014 general elections coupled by the military withdrawal in the same year by the U.S. and NATO-led International Security Assistance Forces (ISAF). Davutoğlu also expressed the need for joint cooperation to combat narcotics, radicalism and terrorism.

During his address, Kazakhstan President Nursultan Nazarbayev stated that his nation has supported the Istanbul Process from the very beginning and that his country is willing to provide all forms of support which befalls them in order to ensure Afghanistan achieves peace.

"This is really a historic day for us," Turkish Foreign Minister Ahmet Davutoğlu said during a press conference after signing a memorandum of understanding with Shanghai Cooperation Organization Secretary-General Dmitry Mezentsev following the conference. "Now, with this choice, Turkey is declaring that our destiny is the same as the destiny of the Shanghai Cooperation Organization (SCO) countries."

During a press conference with Mezentsev, Davutoğlu said that the signing of the MoU to become a 'dialogue partner' with the SCO is in essence the declaration of a shared fate with the organization. "Turkey will be part of a family, which is composed of the countries which lived together not for centuries, but for millennia. This is the beginning of a long way, walking together, hand in hand and shoulder to shoulder," Davutoğlu said.

The partnership will strengthen Turkey's ties with the organization especially in the fields of economy and transportation, and will provide the opportunity to collectively fight against threats," Davutoğlu added. SCO Secretary-General Mezentsev stated that Turkey's participation will strengthen the "Shanghai spirit."

This is a translation of an article originally written by Dilay Gündoğan.