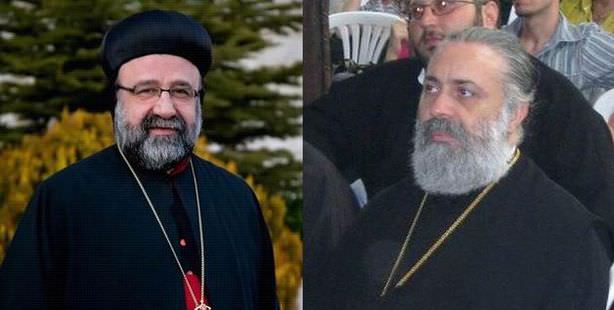 Two prominent Syrian bishops who were kidnapped on Monday in the northern province of Aleppo have been released. Their current location however is being kept confidential.

The Syriac Orthodox and Greek Orthodox Archbishops of Aleppo, Yohanna Ibrahim and Paul Yazigi were kidnapped by Chechen fighters on the road to Aleppo from the Bab al Hawa crossing with Turkey in an area controlled by the Free Syrian army. They were returning from Iskenderun where they had performed a mass at the Saint Nikola Greek Orthodox Church the day prior. The two metropolitan bishops were released early morning yesterday after five days of being held captive. A widespread internet campaign was initiated to secure their release, the news of which has been greatly pleasing. According to sources there is still no news regarding Greek Orthodox Church priest Isaac Mahfood and Armenian Catholic Church priest Michael Kayyal who were abducted three months ago.

Melki Ürek, the Adıyaman Syriac Church Bishop, who is the Syriac religious leader for the Adıyaman, Şanlıurfa, Malatya, Hatay, Mersin and Elazığ regions stated yesterday, "We have received the information that they were released at approximately four-thirty yesterday morning. We have heard that they are in good health. Due to security reasons, we have been unable to find out where they are exactly, however we do know that they are near Aleppo. We are extremely pleased. We are now awaiting the release of the other priests."

Neighboring nations had joined in the pursuit of securing the release of the two Aleppo bishops. Online campaigns were initiated by members of the community in which photographs of the two bishops as well as the priests abducted three months ago were distributed over the internet. Priests Mahfood and Kayyal, have allegedly been captured by rebels who are requesting a ransom of nearly 250,000 dollars.

The Taliban who recently captured 11 individuals, eight of which are Turks, in the Afghani city of Logar have announced their first demand in order to release the captives. The Taliban have expressed their conditions to release the captives as being contingent on the release of certain Taliban members being detained by the Kabul administration. Logar County Council Chairman Abdülveli Vekil stated that they have been meeting with local Taliban commanders to orchestrate the release of the abducted foreign nationals; however the Taliban has put forth the condition that certain Taliban members being held in Kabul be released in exchange for the captives. Logar Deputy Governor Haşim Feyzi has stated that they have yet to obtain concrete results in the ongoing negotiations with the Taliban for the captives' release. The 11 captives, including eight Turks were aboard a helicopter that was forced to land due to bad weather conditions, when they were captured by the Taliban.

Turkey's initiative to ensure the release of the two Aleppo bishops was influential in securing their freedom. Information regarding a meeting between AK Party Deputy Chairman Numan Kurtulmuş and members of the Syriac community was relayed to Foreign Minister Ahmet who also met with Syria representatives before contacting the Free Syrian Army to relay the message that the bishops safety was of utmost importance for Turkey.

A similar mechanism was put into place by the Turkish National Intelligence Organization who is also stated to have contacted the Free Syrian Armey to secure the convinced the Chechen group working in their confines, in order to ensure the captives' release.

A CONFERENCE OF GRATITUDE

On April 30, the Syrian community will be holding a conference in Ankara to discuss the safety secured for their community by Turkey. Numan Kurtulmuş has been invited to be a guest at the conference during which the AK Deputy will be thanked by the entire Syriac community. The event will be broadcasted live by two Syriac channels that broadcast worldwide.

This is a translation of an article originally written by Erhan Öztürk and Mehmet Ali Berber.