Security clampdown in Istanbul to prevent dangerous May Day rallies 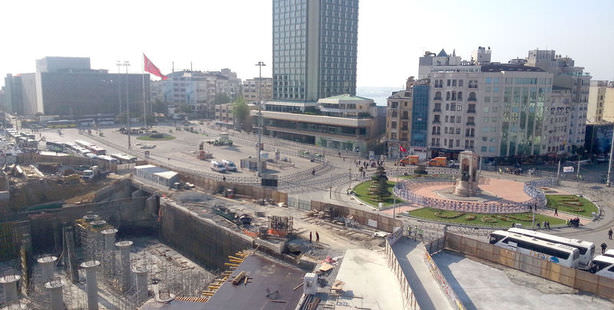 Tension escalated early on Wednesday as police were forced to use measures to disperse groups in Istanbul’s Şişli and Beşiktaş districts attempting to stage an unauthorized march to Taksim Square. Police officers have established calm in the city as a number of security measures have been put into place to ensure public safety.

For decades May Day rallies in Istanbul's famous Taksim Square were prohibited spanning back to a violent demonstration which took place on May 1, 1977 when 34 people were killed from shots fired from a nearby building. The event is considered to be a detrimental precursor to the 1980 coup. Decades later, in 2009 the government announced May 1st, Labor and Solidarity Day as an official holiday and opened the square to Labor Day rallies. This year however, Taksim Square is undergoing a major transformation and the vast construction sites that surround the square were deemed to pose a safety hazard by authorities and therefore Labor Day rallies will not be permitted in the iconic square.

DEMONSTRATIONS IN TAKSIM PROHIBITED DUE TO DANGEROUS CONSTRUCTION SITES

On Monday, Prime Minister Tayyip Erdoğan met with representatives from labor unions to ask that they move their plans for a May Day rally in Taksim to the Kazlıçeşme Square located in the Zeytinburnu district. Erdoğan expressed his concerns that rallies in Taksim could result in demonstrators falling into or being harmed by the 30-40 meter deep vast construction sites surrounding the area.

Istanbul Governor Hüseyin Avni Mutlu also announced that large-scale demonstrations would not be permitted to take place this year in Taksim Square due to the ongoing construction, however a smaller-scale event to commemorate the lives lost in the 1977 incident, which is widely referred to as Bloody May Day, would be allowed.

Thousands of police were positioned throughout the city early on Monday and were forced to intervene with tear gas and water cannons to disperse marginal groups gathering in Şişli and Beşiktaş intending to march to Taksim Square. Demonstrators responded to calls by police to disperse by throwing stones and even injuring a cameraman. As a result, police responded with cannon water and tear gas. Governor Mutlu has announced that there have been two arrests, however no one was injured and police are acting with extreme care and attention to prevent escalating violence.

The Confederation of Progressive Trade Unions (DİSK) is staging an unauthorized march heading for the iconic Taksim Square. Police used tear gas to disperse a group gathering front of the DİSK building in Şişli. The Confederation of Public Sector Trade Unions (KESK) is also insisting on holding a rally and police had to warn a gathering of KESK and CHP members as well as a number of marginal organizations in Beşiktaş Square to disperse.

The calm was quickly preserved and according to sources any any attempts to access Taksim Square quickly died down. With the exception of firefighters which have arrived to extinguish a fire which ignited in the historical Çiçek Pasajı on İstiklal Street, Taksim Square and its vicinity is quiet and experiencing a calm possibly never before seen in the history of May 1st Labour Day.

The state has implemented a number of security measures to ensure public safety and that calmness prevails. Three-thousand police have been dispatched from neighboring regions. Security measures include the cancellation of all Istanbul Ferry Line (İDO) services. Metrobuses and tramways will also not be running throughout the day and the Şişhane-Taksim and Levent-Taksim metro lines as well as the funicular between Taksim and Kabataş were also shut down as of six a.m. Wednesday morning. The Atatük Bridge located in Unkapanı has also been shut down to traffic.