Compensation is not to make up for the blood of our martyrs! 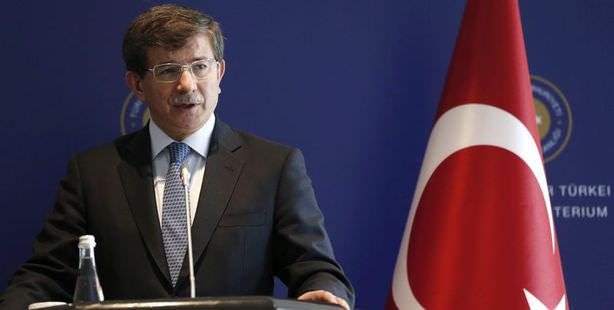 Foreign Minister Ahmet Davutoğlu commented on the compensation negotiations with Israel by stating, “Israel’s apology, compensation and lifting of the blockade are not to make up for the blood of our martyrs, each of which have a significant meaning for us as both individuals and as our citizens.”

Foreign Minister Ahmet Davutoğlu addressed reporters at a press conference following the International Conference on Somalia that was held in the British capital of London, during which he commented on the recent deliberations held between Turkish and Israeli officials in Jerusalem on the compensation to be paid to the victims of the Mavi Marmara raid.

When asked whether they expected to hold a third round of talks on establishing an agreement on the compensation, Foreign Minister Davutoğlu told reporters, "We will evaluate whether there is a need to hold a third round of negotiations when we return to Ankara, however we are aware that a consensus has been reached on the fundamental principles."

Davutoğlu then went on to state the following: "Israel's apology, compensation and lifting of the blockade are not to make up for the blood of our martyrs, each of which have a significant meaning for as both individuals and as our citizens. We see that there have been some people that have brought up the issue on a variety of occasions. There is nothing that could ever compensate what is owed for even a drop of their blood."

Expressing that Israel's apology and compensation is significant in terms of representing and conceding to the rights and laws of Turkish citizens, Davutoğlu stated, "With the apology what was necessary for the relations between states and both publics has been done. The side that is apologizing is doing so for both the admission and the reparation of the crime committed. When compensation is paid out then they will have thereby presented this incident as being one that can be held to account."

In regards to the conference on Somalia, Davutoğlu pointed out that Turkey will be contributing to establish security in the country and stated, "We have begun working on efforts with a 300 million dollar budget. At today's meeting I also announced a new ten million dollar defense and security development contribution package."

ISRAEL TO ISSUE COMPENSATION TO FUND WHICH TURKEY WILL DISTRIBUTE FROM

Israel will be paying Turkey compensation in mass for those killed and injured in the Mavi Marmara raid to a fund from which the government will be distributing to recipients based on age, employment and income as dictated by the legislation in the Turkish Criminal Code. The right to compensation for 546 individuals affected by the Mavi Marmara raid will be issued once the agreements have been approved by both nations' assemblies.

During the two rounds of negotiations between Turkish and Israeli officials, an agreement was reached for Israel to pay into a humanitarian fund, from which Turkey will distribute to the raid victims. In addition to compensation to the families of those killed as well to those wounded in the raid, the amount established will also include reparations for the personal items such as cell phones, cameras, laptops and cash, that were confiscated or destroyed by Israeli forces. Israel will be paying out to a fund from after which Turkey will be in charge of the distribution which will be conducted according to legislation which dictates the amount to be issued based on income, taking into account the individual's age, the income they would have acquired up until the age of 65 and if unemployed then based on the minimum income wage they would have earned. The amount of compensation to be issued to the wounded will vary according to the degree of injury and its effects on their employment abilities. Individuals who were subjected to psychological torture by Israeli soldiers will also be eligible for compensation.

Israel also wants the case filed by the victims' families against the top four commanders at the time who ordered the raid to be withdrawn. However, due to the fact that a criminal case in Turkey cannot be directly withdrawn, the compensation agreement will be made a basis for the trial's verdict. Once Turkey's Grand National Assembly and Israeli's Knesset Parliament have approved the compensation agreement, it will automatically go into effect. Both sides have agreed on keeping the amount Israel will pay out in compensation confidential, however it is allegedly going to be a figure in the single-digit millions. A senior-level official at Turkey's Foreign Ministry clarified, "There are only three to four people who know the actual amount, therefore any form of allegation will never be true and will simply be a speculative figure." Although after nine hours of deliberations between a Turkish delegation led by Foreign Ministry Undersecretary Feridun Sinirlioğlu and by Prime Minister Benjamin Netanyahu's National Security Advisor Yaakov Amidror on the Israeli side, there remains to be a few issues to be finalized however they do not necessitate a third round of talks and will supposedly be dealt with through telephone diplomacy.

A 'FRENCH FORMULA' FOR DISTRIBUTION

Turkish law abides by a French system of calculating the remaining lifetime income that would have been derived from a victim killed or harmed in any sort of attack or accident. The formula is implemented differently for the families of those killed and for those who have been injured. In general the formula for those killed is based on the assumption that the individual would have worked until the age of 60 to provide for their children, spouse and parents. Therefore, in order to calculate the compensation to be issued the victim's age is deducted from the age of 60 and the income the individual would have earned in the remaining years is then calculated based on whether they were employed at the time and if not based on the minimum wage.

The method differs for those wounded and is based on the degree to which their injury will have affected their ability to work. If their current positions are compromised due to the injury then they are paid out what their previous income would have been minus the minimum wage, under the assumption they are still able to work at a minimum wage position. The treatment costs for those wounded will also be included as a one-time fee in the compensation issued.

This is a translation of an article originally written by Safure Canturk and Duygu Güvenç.