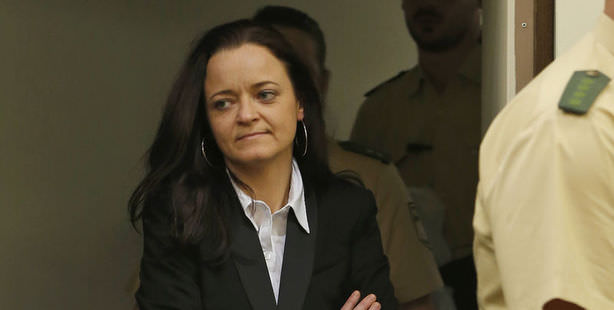 Criticism has gone rampant on the air of indifference displayed by Beate Zschaepe, the prime living suspect in the neo-Nazi NSU trial for ten murders, eight of which were Turks. Zschaepe’s attitude of indifference as she chewed gum and tossed her head smiling with her attorneys and her choice of elegant clothing were widely criticized in the German press. An article in Bild entitled “The Devil Dressed Well” writes that the suspect, who dressed as if she was a businesswoman, is treated like a pop star in prison.

The fact that yesterday's first hearing in the highly anticipated trial of the neo-Nazi National Socialist Underground (NSU) murders in Germany, in which eight of the ten victims were Turks, ended in yet another postponement was widely responded to in the German press. The trial was published as headline news by nearly all newspapers in the nation with articles readily reporting on Beate Zschaepe air of defiance. The fact that she chewed gum throughout the hearing turned her back to the judges and the families of the victims as well as her choice to wear an elegant trouser-suit were frequently mentioned in reports on the trial. In an article whose title translates to "The Devil Dressed Well," the Germany daily Bild wrote that even though Zschaepe arrived to the first hearing dressed in a black suit as if she was a businesswoman and occasionally shared smiles with her attorneys, she was unable to hide the look of evil in her eyes.

SHE WAS DRESSED THAT WAY ON PURPOSE

Prof. Dr. Dietmar Heubrock, a law psychology specialist from Bremen University evaluated for Bild the style of dress Zschaepe chose to wear for the first hearing."This is not Zschaepe's type of clothing. It appears that the defense prosecutors dressed her this way intentionally for the first hearing. The message intended by the way she was dressed was to represent Zschaepe not as a suspect but more so as part of the defense. In terms of her external appearance, her clothing resembled that of her attorneys."

Bild, who also had the opportunity to speak with a female convict who served time in the neighboring cell of the prime suspect in the neo-Nazi murders, wrote that Zschaepe is being treated as if she was a hero. The 31-year-old former convict named Manika M. who was released just a few days ago stated, "The other convicts treat Zschaepe as if she was a little queen. Some were really scared of her while others treated her as if she was a pop star. One immigrant-rooted convict would make her cakes while another Greek convict would find cigarettes for Zschaepe." Monika M, also explained that the prison would receive a lot of letters, the majority of which were for Zschaepe. "There were even some letters that contained marriage proposals. She showed me one of them. The guy had written sentence after sentence of praise," Monika told reporters.

CRITICISM OF THE ATTORNEYS

According to an article in the German Frankfurter Allgemine Zeitung (FAZ) newspaper, the fact that there was a significant recusation demand made in the NSU trial is not necessarily a "rare case" in Germany. The Stuttgarter Zeitung daily wrote, "If it had been up to the gentleman of Turkish heritage in the Higher Munich Regional Court, then prosecutors would have completely "extracted" all information from the terrorism suspect Zschaepe. This is an understandable sentiment due to the attempts at glossing over the case made by the extreme-rightist suspects' attorneys who waged psychological games on the very first day of this enormous trial. However, these sorts of attempts have nothing to do with moral values. Especially when taking into consideration the suffering experienced by the 24 relatives of the nine immigrants and German officer that were murdered."

This is a translation of an article originally written by İsmail Erel and Rahmi Turan.