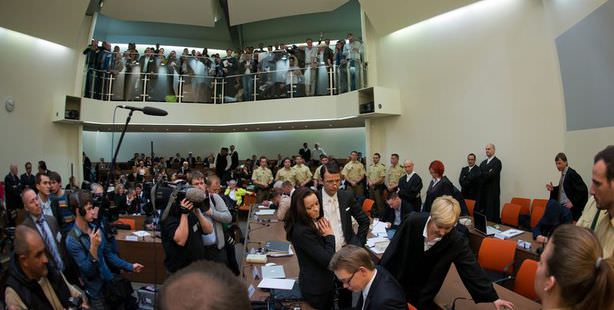 Yet another scandal has surfaced in the highly anticipated and controversial trial of a series of neo-Nazi murders in Germany. The trial of the NSU which commenced on May 6th has faced nothing but delays and questionable developments such as the destruction of documents, the withdrawal of information and agents refusing to talk and now it turns out that five crucial documents in the case were never handed over to the investigation commission.

Incidents of negligence and scandalous actions continue to unfold one after the other in what is considered to be the biggest trial in the history of modern Germany of the extreme-rightist National Socialist Underground (NSU) terrorist organization which is charged with murdering ten people in Germany, eight of which were Turks.

The Berlin Regional Criminal Department has now announced that only two of the seven files they had on the NSU were sent to the Federal Assembly Investigation Commission and that the remaining five had been forgotten. The five files that were never delivered were noticed on Monday and are stated to include details from the investigation between the years 2000-2003.

The files supposedly contain information regarding an agent named Jan W. who was suspected by the Brandenburg Regional Constitutional Protection Department of acquiring weapons for the NSU cell.

Known for being one of the closest figures to the NSU, Thomas S. was revealed as being an agent with the Federal Office of the Chief Public Prosecutor. The agent is also claimed to have provided Uwe Mundlos with explosives in 1997.

Files said to contain "a significant number of clues" on those close to the NSU murderers have also previously been destroyed by the Berlin Constitutional Protection Organization.