46 dead and 212 injured in bombing attacks on Hatay 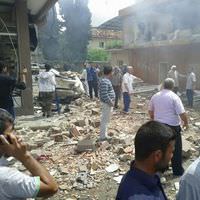 There have been four explosions in the southeastern Turkish province of Hatay, which is located near the Syrian border.

The explosions started at 13:30, and struck an apartment building and a municipal building, while another other one struck a crowded city center. Information has surfaced that the explosions that occurred in the city center were the result of car bombs.

The death and injury toll are rising, as now there are 46 casualties and 212 injured, thereare currently 51 people still undergoing treatment.

The Turkish Minister of Health, Mehmet Müezzinoğlu, released a statement stating that they have sent out vehicles to respond to the situation, and that keeping the injured count from adding to the death toll is of greatest priority.

Turkish Minister of Interior, Muammer Güler, also commented on the situation confirming the two car bombs, he also stated that all necessary precautions will be taken as the event is now under investigation.

Prime Minister Recep Tayyip Erdoğanhas also made an announcement regarding the developments, questioning the motives of those responsible and stating that all available intelligence resources are currently investigating the case. The Prime Minister also announced that the death and injury toll have risen, and that they may continue to. He also stated that these attacks might have been carried out by those that oppose the resolution process.