Gül: "The EU has strategic myopia” 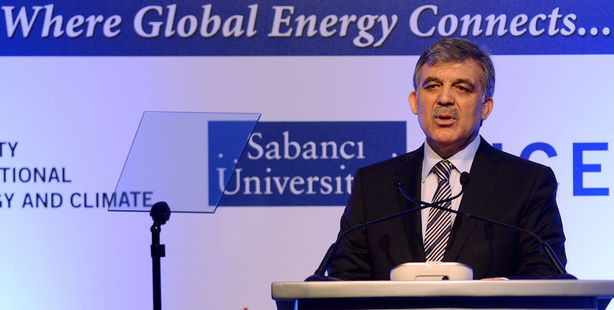 President Gül stated that Turkey’s planned nuclear power plants were not just significant projects for the energy market as well as from a political standpoint, but they are also late in coming. President Gül also spoke out against the European Union by stating, “The fact that a chapter on energy has yet to be opened at this point is nothing more that the European Union’s strategic shortsightedness.”

President Abdullah Gül delivered the opening address where he offered a comprehensive analysis of Turkey's energy policies at the 4th Annual International Energy Forum organized by Sabancı and held at the Conrad Hotel. The conference held under the theme 'Globalizing Energy and Turkey's Role' was attended by a high number of energy sector representatives as well as foreign bureaucrats.

Pointing out the crucial role Turkey plays in Iraq's petroleum production and transport, President Gül said that Iraq is considered to become the world second largest oil producers. Gül reminded that a significant portion of the nearly three million barrels of oil Iraq produces daily goes through the congested Basra Gulf and Strait of Hormuz. "This situation makes Turkey's position even more important within the global energy map due to the country having the longest coastline along the Eastern Mediterranean and therefore maintaining a wide economic region there.

I have always believed that in addition to establishing economic cooperation in the Mediterranean and serving the region with a shared prosperity, on a grander scale the joint economic cooperation will provide a great contribution to solving the political problems in the region. Therefore, I believe that any projects in the Eastern Mediterranean basin should involve Egypt, Lebanon, Israel, Cyprus in its entirety and Turkey at the development stage and be evaluated accordingly."

Noting that countries such as China, Brazil and South Korea have become real global players with their energy companies that are now strong enough to compete with western nations' oil firms, President Gül stated the following: "In addition to the recent developments in the global energy market which will lead to noteworthy changes, is the widespread engagement by the U.S. in shale gas. This development has created a new paradigm in the global energy market.

For the enormous reserves discovered in the USA, Canada, Mexico, Latin America, China and Australia to be presented to the energy market will result in important results from both an economic and strategic standpoint. Meanwhile, it is also inevitable that nations seeing high economic growth such as China, India and Brazil will increasingly obtain a greater share of the energy pie. This means that the energy geopolitics that up until now transpired in the east, west, north and south axis will undergo a rooted change. As Turkey, we are closely following the active energy security policies conducted at a global level by these fast-developing mega economies.

President Gül went on to mention that the nuclear energy efforts Turkey embarked upon a while back were not brought into fruition and therefore they are late in the game and said, "As I also pointed out during my speech at the Assembly, while this magnitude of important developments in global energy policies transpire, Turkey cannot solely suffice to be a transit nation which only provides access to energy. We are a country that is practically at the center of energy regions which has been the axis to great conflict and competition. As we all know, after the notion of benefitting from nuclear energy surfaced on our agenda in 1967-1970 and the resulting work we have done on the issue, the decision was reached to build Turkey's first nuclear power plant in Akkuyu Mersin. Eventually the tender for a second nuclear power plant was held and the groundwork has been laid.

These power stations that we are building with Russia are honor-bearing initiatives. I want to express that these are not only significant projects in terms of both the energy market as well as politics, but they are also a beginning to something that has been extremely delayed." While conducting our nuclear policies, it will be inevitable that we will implement the most advanced globally-accepted safety standards," said Gül.

During his address, President Gül also commented reproachfully on the chapters opened with the European Union and the ensuing developments. Pointing out that the EU had made significant assessments regarding Turkey's energy potential prior to the start of membership negotiations, Gül stated, "The chapter on energy should probably be one of the first chapters opened with a country that has entered the EU negotiations phase. In strategy reports prepared by the EU prior to the start of membership negotiations, it was clearly stated that Turkey's greatest contribution would be in the area of energy which was widely considered to be one of the main reasons for its membership. However, the fact that a chapter on energy has yet to be opened at this point we have reached, and as you know its obstruction, is nothing more that the European Union's strategic shortsightedness," said Gül.