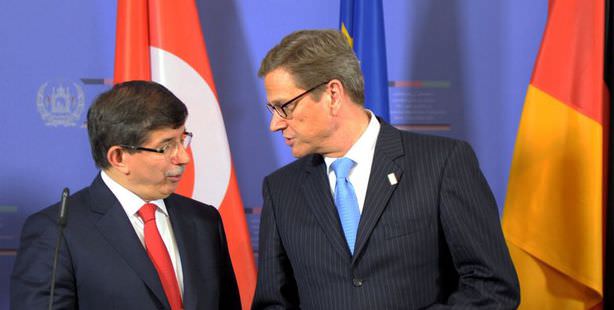 Foreign Minister Davutoğlu states that from the corner he is now holed up in, Assad is still receiving encouragement from the international committee. Addressing the attack on Saturday, Davutoğlu stated that to place blame on the Syrian refugees is equivalent to an act against humanity.

Foreign Minister Ahmet Davutoğlu responded to questions regarding the twin bombings that took place on Saturday in Reyhanlı, in the southern Turkish province of Hatay bordering Syria, that left at least 47 people dead. Participating in a live broadcast on the state-run TRT Türk channel from Germany, Davutoğlu said "The attack has nothing to do with the Syrian refugees in Turkey; it's got everything to do with the Syrian regime."

Explaining that momentum had been garnered regarding reaching a diplomatic solution to the situation in Syria, and that Turkey played a significant role in this development, Davutoğlu emphasized that any plan that Ankara does not approve of will not be applied in either Syria or in the greater region.

Davutoğlu went on to state that although they are closer now to reaching a solution on the Syria crisis; the inaction by the international community has worked to encourage Assad. "The factor that is preventing a solution is the actions by the international community right at the point when Assad should be saying 'it is no longer possible for me to remain here by using these methods.'

In other words, just when the regime nears the approach of saying, 'we are not getting anywhere, nor will it be possible to get anywhere with these methods,' the stance adopted by certain nations that support Assad, who although sometimes state they are against his actions however when it comes to taking on a clear stance tend to draw red lines in other areas, has led to providing him with an area of movement," stated Davutoğlu.

Mentioning that immediately following the attacks, certain circles have attempted to provoke the public which has not yet overcome the shock of the incident, Davutoğlu went on to state the following: "While all of our hearts were burning as we said not another life of our brothers should be lost, it was as if these circles had prior knowledge of the incident as they honed in on two distinct issues. The first being Syrian refugees.' Comments were spread on Twitter stating, 'By accepting refugees, Turkey has in essence brought in a group of criminals to their country and they are the ones responsible for this incident'.

The second issue that surfaced by certain opposition circles was that instead of focusing on the perpetrators of this terrorist attack which was a direct assault on Turkey, they chose to release statements debating Turkey's policies on Syria and holding government officials as the responsible parties.

While Turkey was faced for the first-time ever with the planning of such a heinous attack, certain circles drew on these two targets before the perpetrators responsible for planning the bombings was even revealed."

"Those who staged this attack and infiltrated the blood of our brothers here and those who are trying to pit the Turkish public against our brothers who have sought refuge here did so with the same focus. There is absolutely no basis on which the women, children and innocent people who are seeking shelter in Turkey should be subjected to being made a target. This is a crime against humanity," said Davutoğlu.

FM POINTS TO THE BANIYAS MASSACRE

Foreign Minister Davutoğlu met with his German counterpart Guido Westerwelle in Germany on Sunday after which the two held a press conference. During the conference, Foreign Minister Davutoğlu told reporters that those behind Saturday's bombings were believed also to have been behind an attack on the Syrian coastal town of Baniyas a week ago, in which fighters backing Assad in a civil war were reported to have killed at least 62 people. "There have been nine arrests. It has been established that the bombers were members of an old Marxist terrorist organization that is in direct contact with the regime," said Davutoğlu. Meanwhile, Westerwelle commented on the ongoing neo-Nazi trial by expressing that uncovering the murders is an issue of honor for Germany.