Bombs were brought in from Latakia 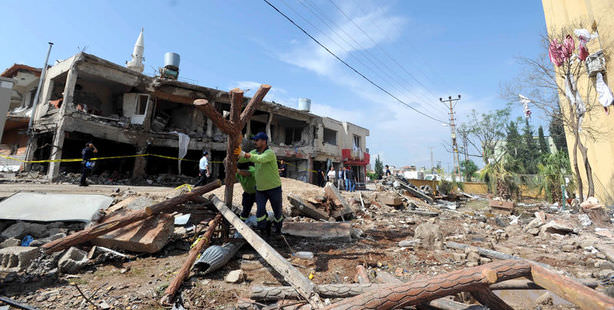 It was a group of 15 perpetrators that planned and staged the twin car bombings which took place in the Reyhanlı district of the Turkish border province of Hatay. At the time this article was written nine arrests had been made, however today the number has gone up to 12 detainments thus far in connection to Saturday’s attack which killed 51. Three key figures in staging the attack; Yusuf B., Nasır E. and Temir D. are still wanted.

New details have begun to surface pointing to 15 perpetrators responsible for planning and staging the two bombings in Reyhanlı, Hatay on Saturday which has led to a death toll of 51. Three individuals: Yusuf B., Nasır E. and Temir D., have stood out as chief suspects in the investigation and police are now tracking their whereabouts. Mihraç Ural is the suspect alleged to have organized the attack in Syria with an individual who goes by the codename 'Hacı'. Suspect Yusuf N. is stated to have been in contact with the two and through this connection supposedly received five million Syrian liras (110,000 TL). Mehmet G. and Temir D. are the suspects claimed to be responsible for setting off the bombs.

THE DETAILS OF THE EVENT

The initial plans for the attack are slated to have begun four months ago. Accordingly, suspect Yusuf B. crossed into Syria from Yayladağı at the beginning of January. One month later, Yusuf B., who alleged staged the attack, entered Turkey and has since never left. Months ago, the suspects began working on acquiring the vehicle and drivers for the attack in Reyhanlı by meeting with a few people in Hatay. According to findings by intelligence units, under Mihraç Ural and Hacı's orders, Yusuf N. organized the arrival of the bombs into Hatay from Latakia by ship.

One of the key suspects, Nasır E. arranged storage for the bombs in the city. Once the bombs had been secured, Temir D. and Mehmet G., who are claimed to be the responsible parties for setting off the bombs, obtained the vehicles used. The vehicles were stored by Mehmet G., a man who has an extensive record of fraud who works in a body shop.

Another suspect, Ahmet M., who went to Ankara for surveillance purposes, met with one of the main organizers of the attack Yusuf B. nearly four months ago. According to the information obtained, Ahmet M. and Yusuf B. left Hatay awhile before the attack and went to Konya to take photographs of the surroundings of a mosque. The two suspects then went to Ankara in a white Transit where they took photographs of the surroundings of Kocatepe Mosque in the capital and then returned to Hatay on the same day. The two later returned to Ankara and Gaziantep to tour auto galleries to look into purchasing a Transit; however they found the prices to be too high. Accompanying Ahmet M. on his trip to the Kocatepe Mosque in Ankara were said to be two foreigners by the names of Muhammed D.K., Doğan Ö.

The suspects that have been arrested thus far in connected to the Reyhanlı bombing are: Mehmet K., Ahmet M., Ahmet A., Mehmet G., Alaattin K., İhsan K., İskender Ş., Fikret N. and Nasrettin H. Suspect Nasrettin H. is being charged for assisting in concealing the bomb-laden vehicles in the village. İskender Ş. went to Syria to bring in to Turkey one of the organizers of the attack Nasır E. İhsan K. supplied Nasır E. and other perpetrators with GSM lines and cell phones. Alaattin K. assisted the perpetrators in finding an empty storage unit. According to allegations, Ahmet M., who has been detained, arrived to Ankara on May 4 with Yusuf B. Ahmet K., arranged for the drivers to bring the vehicles and Mehmet G. is being held for having devised the hiding place for the bombs in the vehicles.

A MEAL AFTER THE BOMBING

Five days before the bombing, the suspects are stated to have driven to Reyhanlı in a Hyundai and drove around without making any stops. After the bombings took place, Yusuf B. met with his collaborators at a restaurant where they supposedly ate a meal. According to the information obtained, Yusuf B. told those he was with that he would be leaving the country. It is thought that he may have escaped to Syria following the attack.

Two of the vehicles used in the attack were put into Mehmet G.'s name on April 24 and on May 4 one of the vehicles went to Ankara. Suspect Nasır E. was also in close contact with members of the Acilciler group. Yusuf N., who is suspected to have organized the attack from Syria, has crossed into Syria from Hatay 380 times. Yusuf N., who also has a record for smuggling, last crossed into Syria on April 19 and returned to Turkey entering Yayladağı on April 30.

Turkey wants the U.S. to lead the way

The global press has also been closely following the details of the Reyhanlı attack. Reports point to the refugee crisis and the intentions to draw Turkey into war.

*Britain's Financial Times: Ankara is facing difficulties responding to a series of fatal events and therefore wants the U.S. to lead the way.

*BBC: These attacks will put pressure on the Turkish Prime Minister.

* The Guardian: Turkey is raising the tone of their voice against Syria.

* U.S. Washington Post: The bombs threaten igniting the tension regarding the presence of 325,000 Syrian refugees.

* France's Le Figaro: Even though the Turkish government appears to be convinced the attack was staged by the Syrian regime, certain experts are weighing in on the possibility it was an attack intended to draw Turkey into the war.

* Russia's Rossiyskaya Daily: The newspaper defends that the last thing the Damascus administration would want to do is further fray ties with Turkey and said that this attack has now strengthened the hand of those wanting to prevent the Moscow-initiated plans to hold an international conference on Syria.

Speaking to reporters from Jordan's official newspaper Al Rai, former State Minister Salih el Kallab reminded that Syrian President Assad's father Hâfız al-Assad gave orders in the 1980's to stage bombings in Jordan, and said that his son Bashar al-Assad has now repeated history in Reyhanlı. According to Kallab, these attacks should be evaluated as attempts to spread the crisis in Assad's nation to neighboring countries.