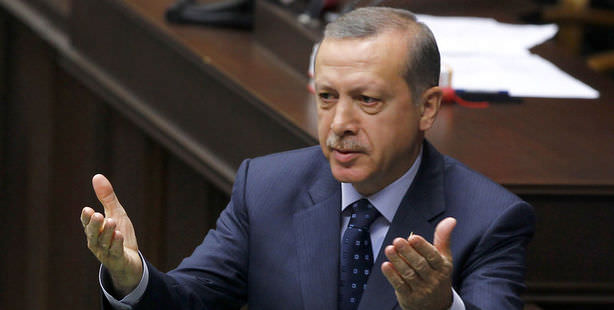 Prime Minister Erdoğan announced the latest death toll from the twin bombings in the town of Reyhanlı in Hatay, which took place on Saturday.

Addressing members of the AK Party at a parliamentary group meeting, Prime Minister Recep Tayyip Erdoğan announced that unfortunately the death toll in the attacks has now reached 51. Prime Minister Erdoğan also shared that they have sent 7.5 trillion liras to the governorship's account and said that the state has mobilized all of its efforts to deal with the situation.

"Both Turkey and Reyhanlı will overcome this attack with ease. The wounds inflicted from the attack will be healed as soon as possible," Erdoğan told an audience of AK Party members.

Prime Minister Erdoğan noted that the perpetrators behind the bombings have mostly been revealed and stated that they have uncovered that it was a Turkish-based organization with links to the Syrian regime that was responsible. Erdoğan added that 13 arrests have already been made.

The following are a series of excerpts from Erdoğan's AK Party group meeting address:

"Great nations are those who act with reason in the face of these sorts of provocative incidents. We will not swallow this attack; we will retaliate in full against the perpetrators of this vile attack. By acting cold-blooded, we will not fall into the traps they are trying to drag us into.

Terrorism is an attempt to spread propaganda through attacks. Terrorism is intended to shape society as well as politics.

We see how those segments of society that necessitate sensitivity, fall time and time again into the traps of terrorism. While black smoke still billowed from the streets of Reyhanlı, attempts to stage provocations were opportunist and distasteful.

We do not have any problems with the Syrian public. We do have issues however with the tyrant dictator regime. We never cut our ties with Syria when the crisis began. We always waited in hope.

We are a nation that will always stand by the oppressed and not the oppressors. We are not like the main opposition party who stands beside those murderers with bloody hands; we are a party that stands behind the oppressed.

There are two main axles when it comes to our Syria policy. We want peace in the region. A nation that remains indifferent to its brothers will never, ever become a great nation. The second and most import axle of our Syria policy is the humanitarian aspect.

If we are going to remain silent as children are being murdered, then what need is there for the AK Party? CHP, MHP and BDP can do that. Our foreign policy has always had heart, conscience and reason. We will stand by the oppressed and will defend their rights to the end. I wonder how those who say Syrian refugees should go are able to look into the faces of their neighbors. What makes us a great nation is that we support the oppressed in their times of difficulty.

If we were to pretend we don't see the babies rolled up in the fetal position with two legs dismembered and half of their tiny bodies burned; then we will withdraw from politics altogether. This is our understanding. We conduct politics for Turkey's babies and the world's babies. If we turn our backs to them then what is the point of conducting politics."

Erdoğan also accused the chairman of main-opposition party CHP of continuously provoking Alevi citizens and said that by supporting Assad, they (the opposition) are playing a bloody game. Erdoğan went on to remark that the CHP leader is seen in photographs with the murderers who staged bloodshed in Reyhanlı. "I am addressing 76 million, do not fall prey to the tension increased by the opposition," said Erdoğan.

Prime Minister Erdoğan also announced plans to visit Reyhanlı and the surrounding region as soon as he returns from his U.S. trip.