A hand in all ten murders 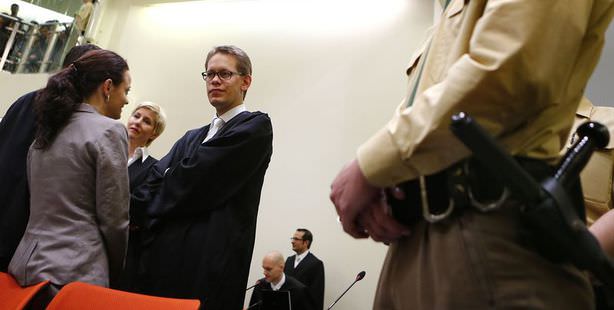 The case of Beate Zschaepe and the National Socialist Underground (NSU), the group blamed for the murders of eight Turks, a Greek and a German policewoman, resumed yesterday for the second day of the eagerly awaited trial which was dominated by legal arguments and a reading of the charges against Zschaepe, whose two presumed male accomplices, Uwe Boehnhardt and Uwe Mundlos, both committed suicide in 2011. The sole living prime suspect, a 38-year-old German woman by the name of Beate Zschaepe is being charged with complicity in all ten of the murders.

The trial of the far-right National Socialist Underground (NSU) terrorist organization, which is being charged with having committed a series of racially motivated murders, resumed yesterday. The hearing began with a series of attempts to adjourn the trial, all of which were rejected by the court after which Federal Public Prosecutor Herbert Diemer read aloud the indictment in the case.

"COMPLICITY IN THE CRIMES"

Zschaepe is said to have been a founding member of the NSU and was in charge of the terrorist cell's finances. All money that came in from the bank robberies was handed over to Zschaepe who is slated to have been in charge of arranging all of the organization's spending. The indictment charges Zschaepe with complicity in all of the crimes committed by the NSU and notes that Zschaepe acted in complicity with the late Uwe Mundlos and Uwe Böhnhardt in all ten murders. The 35-page indictment, which also charges Zschaepe with complicity in two bombings in Köln, took 70 minutes to be read aloud in court yesterday.

Prime suspect Zschaepe refrained from answering any questions on her identity posed to her by presiding judge Manfred Götzl prior to the reading of the indictment and her attorneys announced that their client would not be providing any information. Nevertheless, the judge continued to read aloud Zschaepe's name and address. Suspect Andre E. announced that he would not be providing any other information after identifying himself. The remaining suspects simply responded 'yes' when asked to verify their name and address.

Wearing a light grey trouser suit, with her long hair tied back in a ponytail, Zschaepe listened motionless to the charges read aloud by Federal Public Prosecutor Herbert Diemer, which detailed every act staged by the NSU terrorist organization. She has maintained a resolute silence since her arrest, leaving people struggling to make sense of her motives.

THIS TIME THE GAME DIDN'T WORK

The first hearing began with a request for recusation as defense attorneys claimed bias was evident from the searches conducted upon their entry into the courtroom, leading to the postponement of the start of the trial. On the second day of the resumed trial, Beate Zschaepe's attorneys were at it again, however this time they requested the trial be adjourned due to the inadequacy of the courtroom. Zschaepe's defense attorney Wolfgang Heer, stated at the start of the hearing, "The capacity of this courtroom is not conducive to allowing the trial to be sufficiently open to the public. In addition, many of those present will only be able to see the witnesses from behind, which will prevent an accurate testimony being provided." Heer noted that there may be up to 70 additional intervening parties in the case and said it was inevitable that they would have to switch rooms. The attorney also pointed out that their workspace was directly visible by the judge pulpit and requested that measures to be taken to amend the situation.

Judge Götzl pointed out that they were welcome to use the back rows; however the attorney refused and continued to aggravate the judge. When Götzl stated that he would not accept this manner of address, Heer accused the judge of interrupting him. Judge Götzl responded with a surprising proposal by noting that due to the possibility of an increase in the number of intervening parties, the Keupbtrasse bombing could be tried as a separate case. Götzl requested that all intervening parties relay their views on the proposal today. After the lengthy legal deliberations, in the end, the court rejected all claims and began the process of verifying the suspect's identities after which the indictment and charges against the suspects were read out loud.

This is a translation of an article originally written by Rahmi Turan and Mikdat Karalioğlu from Munich with wires.