Erdoğan in Washington to hold highly anticipated meeting with Obama 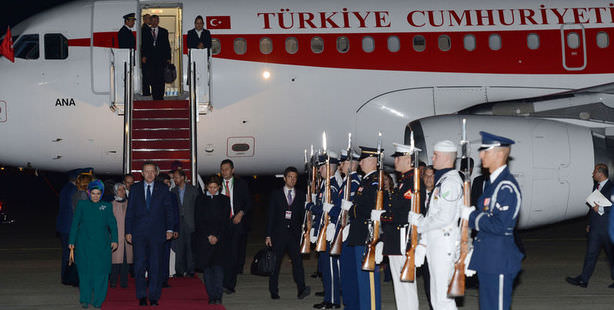 Prime Minister Erdoğan, whose arrival to the U.S. on Tuesday was welcomed with an official military ceremony, will meet with U.S. President Obama today for a highly anticipated meeting in which the two will discuss the situation in Syria, the Transatlantic Free Trade Agreement, Iran, North Iraq and Israel-Palestine peace.

Prime Minister Recep Tayyip Erdoğan's trip to the United States began on Tuesday when he arrived to an official military ceremony in his honor at the Andrews Air Force Base in Maryland. Prime Minister Erdoğan, who is accompanied by his wife Emine Erdoğan, Foreign Minister Ahmet Davutoğlu, Energy Minister Taner Yıldız, Deputy Prime Minister Bülent Arınç, Economy Minister Zafer Çağlayan and EU Affairs Minister Egemen Bağış, is being accommodated at the prestigious Blair House during his stay. While usually an American flag waves at the top of the official accommodations, which are only provided for the highest level visitors, these days a Turkish flag, which has been hoisted up above the residence, is the sole flag that waves.

On Wednesday, Prime Minister Erdoğan attended a groundbreaking ceremony for the Turkish American Culture and Civilization Center in Maryland. Erdoğan's highly anticipated meeting with U.S. President Barack Obama will take place on Thursday. Erdoğan will first meet with Vice President Joe Biden and U.S. Secretary of State John Kerry over a working lunch after which he will meet with the Speaker of the House of Representatives John Boehner. Erdoğan will be joined by his delegation to meet with American businessmen at the U.S. Chamber of Commerce. Later, Prime Minister Erdoğan will be meeting with President Obama and will attend a dinner at the White House. On Friday, Erdoğan will be delivering a speech at the Brookings Institution and will attend a conference organized by the Foundation for Political, Economic and Social Research (SETA). Later, he will attend a reception hosted by the Turkish Embassy in Washington.

Erdoğan has prepared a number of files for today's meeting with President Obama. While Syria tops the list, the two will also be discussing Iraq, Iran, Middle East peace and transatlantic economic cooperation. Erdoğan will also be greeted by an escort of honor at the White House today where he will arrive to meet with the U.S. President during a dinner which will follow a meeting amongst delegations. The leaders have set aside two hours at this evening's event in, held in Erdoğan's honor, in order to speak one on one. The following are a series of items anticipated to be brought to the table at tonight's meeting:

A SYRIA WITHOUT ASSAD

* Erdoğan will be relaying to the U.S. President that the Assad administration is instilling terror and fear in the region and the latest bombing in Reyhanlı is evidence of this fact. Erdoğan will also be bringing up the suspicious findings pointing to the Syrian regime's use of chemical warfare against its own public. Ankara wants Obama to take on more assertive action in order to establish a scenario in Syria which does not involve Assad. Turkey is in favor of members of the Baath party which have not been involved in the violence, playing a role in the transitional government.

* Ankara is also placing high importance on the Transatlantic Free Trade Agreement to be signed between the United States and the EU. During a trip to Turkey, U.S. Secretary of State John Kerry had promised that the agreement would also be signed with Turkey. However, what Ankara wants is for this promise to be reflected in the EU-USA agreement.

* Iran's stance in support of the Syrian regime will also be an issue brought up as will the current point reached in nuclear negotiations. The message will be delivered that Iran needs to draw a line ensuring its nuclear program is within the borders of peaceful means and that the use of all diplomatic channels and dialogue will not be abandoned.

* In order to establish peace in the region, Obama will be asked to increase pressure on the Israeli government. Erdoğan will deliver the message that they need to work together to ensure Palestine's unity at which point Hamas could begin a political transition. "We are expecting the U.S. to promote Palestinian President Abbas," is another message to be delivered.