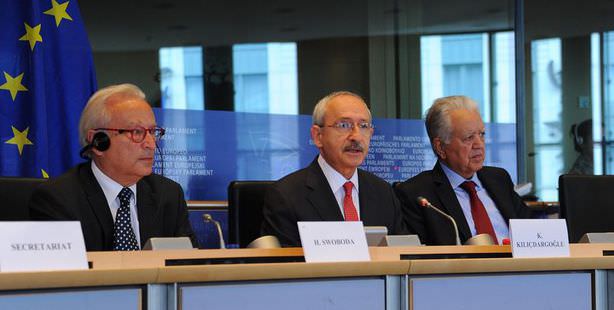 Comments made by CHP Chairman Kılıçdaroğlu at a press briefing following a meeting with the Group of the Progressive Alliance of Socialists and Democrats in the EU Parliament resulted in the decision of EU Socialist group leader Swoboda to cancel their bilateral meeting.

Kemal Kılıçdaroğlu, Chairman of the main opposition Republican People's Party (CHP) was in Brussels to attend a meeting of the European Parliament Group of the Progressive Alliance of Socialists and Democrats, when statements he made regarding Prime Minister Tayyip Erdoğan at a press briefing resulted in the cancellation of a bilateral meeting with EU Socialist group leader Hannes Swoboda, scheduled for later in the day.

Kılıçdaroğlu, who was in Brussels to attend a meeting of the European Parliament Socialists and Democrats Group, was scheduled to hold a bilateral meeting with Swoboda in the afternoon. However, the comments made by the CHP leader at a press conference held in the morning, resulted in igniting a diplomatic crisis. When the questions directed towards Swoboda came to an end, the EU Socialist group leader left the press briefing only to hear later that a series of inopportune comments were made by the Turkish main opposition party leader.

Kılıçdaroğlu was dishing up criticism of Erdoğan's comments following the twin bombing attack in Reyhanlı when he likened Prime Minister Erdoğan to Bashar al-Assad and said that both were oppressive and that there was only a difference in tone between them.

Swoboda responded with an announcement stating that such comments were unacceptable. "I cannot accept the CHP leader, who was a guest of mine, comparing Prime Minister Erdoğan to Syrian President Bashar al-Assad. This is just unacceptable." Swoboda's announcement went on to state, "Even though Erdoğan's policies may legitimately be debated, there is absolutely no way he can be compared to Assad, who is a leader waging war and terrorism against his own public."

Swoboda told the CHP leader that if he was willing to retract his words then he would be willing to attend the bilateral meeting. However, Kılıçdaroğlu refused to change his statement in any way and therefore the scheduled bilateral meeting between the CH leader and Swoboda was cancelled. The CHP leader did go on to meet with European Commissioner for Enlargement and European Neighbourhood Policy Stefan Füle and European Parliament President Martin Schultz.