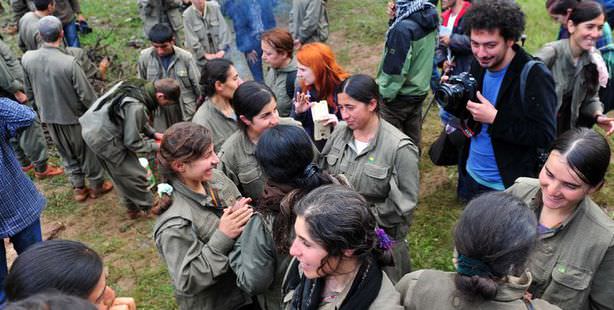 The second group of PKK terrorists to withdraw from Turkish territories made their way to the Uludere-Çukurca-Iraq triangle yesterday morning at 8:00 am from where they crossed over the border into northern Iraq.

The 15-member group, which included five women, was greeted by other PKK members at the Metina Camp after a nine day trek as part of the ongoing withdrawal process. Leader of the group Seyda Gabar explained that there were times when they faced great dangers and were forced to cross rivers that surpassed their height. Gabar also said that three members of the group suffered from frost bite to their toes.

Blaming the weather conditions, the reconnaissance flights and being searched by village guards as contributing factors to delaying their arrival, Gabar said that the trip which should have taken five days instead took them nine days to complete.

Pointing out that there were a number of younger PKK members that did not want to be persuaded to adopt the peace process and instead wanted to remain in the mountains, Gabar said, "We had a difficult time convincing them to come."

Another group leader Sosin Alan explained that they were constantly watched over by village guards and said that it took a lot of effort to not engage in combat. Also amongst the group were two 18-year-old members Ruken Berivan and Avaşin Eriş who had just joined the terrorist organization a few months ago.