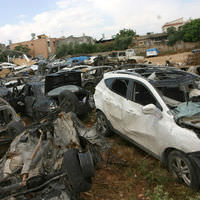 The ongoing search efforts to find a third vehicle allegedly involved in the bombings in Hatay last week have succeeded in locating the car, which was found abandoned in an ally in Hatay.

Security departments had warned that the vehicle could be used for similar attacks. Upon inspection of the vehicle no traces of explosives were found, however the fingerprints of some of the suspects in the Reyhanli bombing were detected.

The vehicle was last seen on footage caught on city-surveillance MOBESE cameras in Adana.
Last Update: May 18, 2013 4:06 pm
RELATED TOPICS