Erdoğan calls on Islamic community to lobby for U.N. expansion 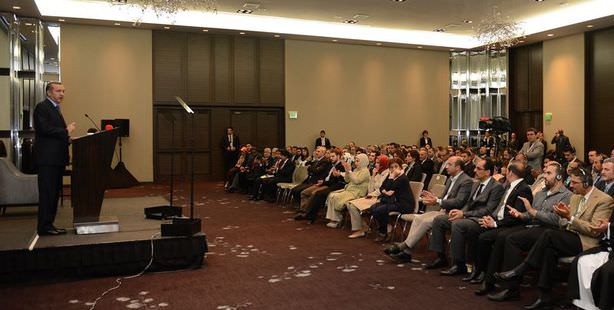 “The United Nations Security Council does not establish justice,” said Erdoğan calling on the Muslims residing in the U.S. to lobby for support for the U.N. to increase their number of permanent member-nations.

Prime Minister Recep Tayyip Erdoğan delivered an address for representatives of the Turkish and American-Muslim community in San Francisco, during which he criticized the fact that the world's fate lies in the hands of the five permanent members of the United Nations Security Council. During the two-hour speech, Prime Minister Erdoğan called on the Muslims living in the United States to lobby for the Security Council's expansion while also delivered the following messages:

"I have been tracking the efforts of Muslim's that have been active throughout the U.S. in admiration. The fact that you have become successfully integrated in your society holds high significance for Muslims all over the world. Your efforts ensure that Islam is correctly promoted and understood in American society while also provides the opportunity for you to act as a bridge between the American and Islamic world. I believe that it is the duty of each and every Muslim present here to ensure that there is better recognition of the Islamic religion as well as Muslims and for mistaken perceptions and prejudices to be transformed in the United States.

There needs to be more work done in order to improve the social, economic and political status of Islam in the world. We need to do some serious soul-searching and accounting to ask ourselves how we can do better. It is impossible to go any distance by seeking to blame others. That is why the Islamic world is in need of some serious accounting, rattling and awakening.

Then there is the issue of Islamophobia. It is extremely wrong and dangerous to judge Muslims based on historical prejudices or a few bad examples from more recent times. We have witnessed from time to time that there has been extremely dangerous propaganda staged against Islam and Muslims. To portray Islam as dark and Muslims as if they are terrorists in no way conforms to justice and rights."

Explaining that the root of the world Islam is derived from 'silm', which means peace, Erdoğan said that therefore the concept of Islamic terrorism cannot exist. Calling on participants to always share this notion in every platform, Erdoğan also went on to address the inadequacy of justice in the current structure of the U.S. Security Council.

THERE IS NO JUSTICE

"I mention at every opportunity that the current international system is not fair. I regularly express the necessity of reforming the current structure of international organizations such as the U.N. Security Council. This is because the U.N. Security Council does not deal out justice. Right now there are five permanent member nations which hold the fate of humanity between their two lips. How should it be? Well it should have 15 members with permanent status each. There is no way that a few can be permanent members and a few temporary. This should change in a rotation, for example every year or every two years.

Members from every continent and religious faith should have representation as the membership rotates. Is there representation of every continent in the Security Council now? No. Is there a member representing each religion? No. Well then, there is no way justice can be served. This is discussed and debated everywhere. And you right now, as civil society organizations living in the U.S., should be establishing the infrastructure of this notion at conferences, panels and symposiums. This a duty that befalls all of us. This organization may have been established in the past under conditions based on war; however that does not mean that it has to continue in the same manner.

At present, the situation in Syria is dependent on the words of two nations and right now there is no way to intervene. Can you imagine, nearly 100,000 people have been killed, 283 missiles shot, planes are continuously staging bombardments, tanks and rockets are being set out after people. There are 300,000 refugees in my country alone," said Erdoğan.