Minorities in Turkey are pleased by the AK Party's efforts 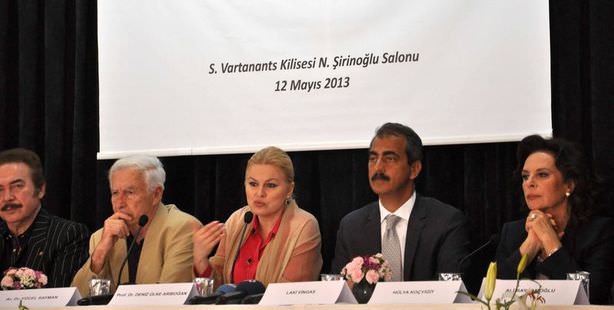 In a meeting with members of the Wise Persons’ Commission, Istanbul’s minority community representatives had the opportunity for the first time ever to openly and undauntedly relay their demands for the mistakes made in the past to never be repeated and for all previously established obstacles to be lifted.

In addition to the influential role played by the Wise Persons Commission, formulated as part of the resolution process, they are also tasked with the duty of defining the demands put forth by a number of minority communities for the ongoing efforts to draft a new constitution.

As part of this process, the Wise Persons' Commission assigned to the Marmara region held a meeting with members of Turkey's minority status communities. On May 12, members of the Wise Persons' Commission held a meeting at the Surp Vartanantz Armenian Church Foundation Bedros Şirinoğlu Hall, located in Feriköy, Istanbul, where they had the opportunity to hear out the demands of the nation's Greek, Armenian and Jewish communities.

Expressing how important it is that this opportunity to meet with the government-appointed Wise Persons' Commission has been granted to them, as they have never been able to voice their demands and concerns before; minority representatives relayed their experiences in order to ensure that what transpired in the past is not repeated.

Amongst the examples they provided was the fact that as a result of the foreign policy put in place in the Republic following the Atatürk era, they were sometimes considered to be citizens while at other times were perceived as foreigners and as a result have faced injustices and discrimination by the judiciary, they have had their foundation properties confiscated, schools and orphanages were shut down overnight, while patriarchates were unable to even own bank accounts due to not being granted status as a "legal entity", the Istanbul riots of September 6-7, 1955, campaigns for citizens to speak Turkish, being unable to receive ranks in the military, restricted from admission to military schools as well as not being able to become diplomats even if they have graduated from an international relations department were amongst the past experiences relayed.

PLEASED BY THE GOVERNMENT'S EFFORTS

Pointing out that as citizens of the Republic of Turkey, they feel that they are a part of the Turkish community, minority representatives shared their anguish at being all-of-a-sudden considered as enemies by the public following events that transpire in Greece, Israel, Armenia and even Cyprus. Minority community members passionately and openly expressed their shared sentiment of satisfaction in finally being able to communicate with the people that will hear out their complaints and issues in order to relay these concerns to the government…

RIGHTS AND CONCERNS BROUGHT TO AN ACADEMIC PLATFORM

The meeting in Istanbul was followed by a conference held on May 13 at the Ankara University Political Science Department's Human Rights Center which was attended by minority representatives, academics and lawyers, and provided another opportunity for Turkey's minority representatives to share their concerns. Representatives from non-Muslim communities pointed out that due to the fact that they were not considered to be a "legal entity" in Turkey in the past, they were forced to file complaints with the European Court of Human Rights, one example of such case being the pursuit for the return of the Büyükada Greek Orphanage.

The Büyükada Greek Orphanage, which is the biggest wooden building in Europe, was granted to the Patriarchate in 1903 by the Ottoman administration. In 1927, the Patriarchate was registered and thereby accepted as being a legal entity. However, in later years following the confiscation of the property by the state, when the patriarchate requested the orphanage's return they were refused under the basis that they did not retain "legal entity" status. The property was later returned to the Patriarchate as result of the verdict reached by the ECHR from a case filed in 2002. The fact that following the Atatürk era 90 percent of minority property was confiscated for various reasons was a grave concern addressed during the Ankara conference.

In Ankara, it was also stated that efforts are currently being made through the adoption of various new legislation in order to rectify the mistakes made in the past. Minority representatives in turn congratulated the government for their efforts exerted thus far to lessen to a degree these sorts of legal issues they have had to face.

Speaking at both the Wise Persons' Commission meeting as well as the conference in Ankara, Laki Vingas, the representative for the minority foundations in the General Assembly Council of the Foundations General Directorate, said that not being granted legal entity status has posed a significant obstacle, however due to a series of government initiatives, minority communities have been able to make meaningful progress.

"The fact that for the first time ever as minorities we have been able to lay these issues on the table in Ankara, the decision-making center we were always terrified to approach, is already a great success. It is Ankara's increased openness towards minorities that has contributed to this," stated Vingas.

Expressing how pleased they are that their ideas are being sought in the constitution-drafting process, Vingas responded to a question of whether he thinks Turkish citizens of Greek heritage that migrated from Istanbul would ever return as a result of this ongoing process, by stating, "Why not? Everyone wants to live in a country that respects democratic principles and that applies the laws of state, and especially if that country happens to be their own homeland. This government is sending out signs that this is a course they would like to follow."