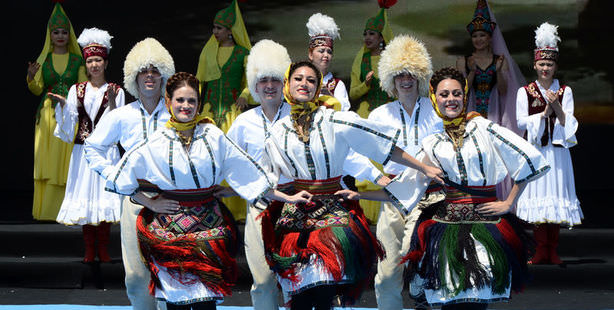 Vibrant and colorful festivities were hosted throughout the country on Sunday for Turkey’s national May 19th Commemoration of Atatürk, Youth and Sports Day.

Commemoration of Atatürk, Youth and Sports Day was celebrated throughout Turkey with a wide array of festivities on May 19th, the anniversary of the beginning of Turkey's War of independence led by founder Mustafa Kemal Atatürk, who landed in Samsun on the very same day in 1919.

Celebrations were held throughout Turkey with a variety of festive and colorful events to celebrate the nation's youth. Youth and Sports Minister Suat Kılıç was on hand in Ankara where he and his accompanying delegation laid a wreath on Atatürk's Mausoleum. From there, he moved on to the Anıttepe Sports Center to participate in the official celebrations held in the capital for the holiday.

Speaking at the event for an audience of youths that arrived to the capital for the festivities from Turkey's 81 provinces as well as from 27 different countries, Minister Kılıç stated, "This holiday is now one which is welcomed with great excitement and joy felt deeply in the hearts' of our nation's youth and children. This holiday is no longer one celebrated only by an official procession of a parade of vehicles, it is now becoming a holiday that provides the opportunity to celebrate the spirit of May 19, the resistance to occupation, the nation's liberation and founding which is celebrated with more joy and excitement as each day passes." Pointing that the youth have the strength to solve any problem they choose, Kılıç said, "We now say that the youth of this geography will once again know how to join together as they did in the past."

In Ankara, the CHP (Republican People's Party) Youth Wing hoisted a 200-meter Turkish flag which they marched with carrying all the way to the Atatürk Mausoleum.

Celebrations in Istanbul kicked off with the laying of a wreath at the Republic Monument in Taksim Square. In Şişli, nearly 10,000 people walked with Turkish flags, establishing a parade. In Kadıköy, festivities kicked off at nine in the morning and ended at 19:00 in the evening with a "Youth March" on the district's famous Bağdat Street.

Thirty-thousand people came out to celebrate the holiday in Antalya with festivities that began with a torchlight procession which started from Konyaltı's Beachpark. Antalya residents carried a huge 300-meter-sized Turkish flag to Cumhuriyet Square, chanting slogans all the while. The day's festivities ended with a concert by Kayahan in the Mediterranean's city's popular square.