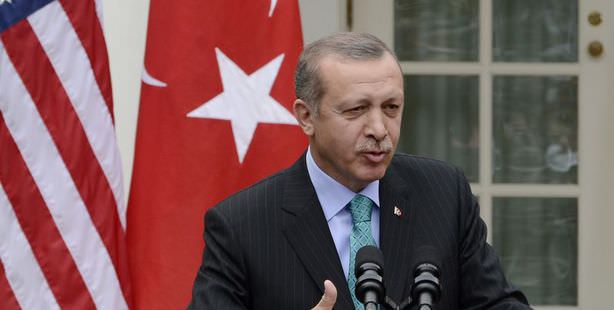 If no results are reaped from the parliamentary efforts to collaborate on the drafting of a new constitution, then the AK Party may bring to the agenda a 20-30 item charter which would include amendments to allow a switch to a semi-presidential system.

Speaking to reporters during his U.S. tour, Prime Minister Recep Tayyip Erdoğan said that in the case the parliamentary Constitutional Reconciliation Commission is unable to conclude efforts to draft a constitution, then the ruling AK Party (Justice and Development Party) may present a charter package which would include legislation to switch to a "semi-presidential" system as well as 20-30 additional amendments for which a consensus has already been reached with the other assembly parties.

Announcing that there could end up being three elections held in 2014, Prime Minister Erdoğan stated, "We want to open up to debate the possibility of switching to a presidential system. If we were to switch to a presidential system, then which mentality would be eliminated? They are most likely concerned that it will be their own mentality that will be done away with. If there are no results, then we will go to Plan C," stated Erdoğan inferring presenting their own draft to an assembly vote. "We have 326 deputies. We would introduce the charter to a secret vote in parliament. As you know, the voting will be done in a closed session. There may be certain brave individuals that come out despite the pressure exerted by their party."

Along with this announcement, AK Party lobbyists are now saying that should the Parliamentary Constitution Reconciliation Commission fail to reach the desired results, a new road map may be followed. This new road map will entail the AK Party first sharing their own charter draft with the public during which they will explain the amendments they are hoping to make. If they are unable to garner assembly support, then they will present the "constitution reform package" to the public in a referendum. The framework of this charter will not be as extensive as the current ongoing constitution deliberations were expected to be. Instead, this charter draft will consist of 20-30 items, which will include amendments needed to be done immediately as well as other items involving liberties and administrative issues.

Even though the AK Party may want the switch to a full presidential system, the package will actually place a greater emphasis on a "semi-presidential" system. Meanwhile, this will also offer the chance to check the political pulse of the presidential model. This is because when the minutes of the peace talks held on İmralı Island with the imprisoned PKK leader Öcalan were leaked to the press, the public established a connection between the resolution process and the administrative system. This mental connection has also been reflected in public surveys and suddenly support for a presidential system failed to surpass the 40 percentile level of support.

The AK Party will be making a few amendments for the semi-presidential system. The current clause in the constitution which states "The President is the head of state, will be amended to instead state", "The President is the head of the executive. The semi-presidential system that will be put into place in Turkey will actually resemble the current system in France. The president will be able to use the authority granted by the constitution in order to appoint a prime minister and ministers. They will chair the Council of Ministers and the National Security Council. The second alternative would be a "party presidential" system in which case the clause that "a president will no longer be connected to a party" will be lifted.

FROM TURKISH TO TURKEY CITIZENSHIP

One item in the package, which bears significance in light of the ongoing resolution process, is in regards to classifying citizenship. The article in the current constitution on "Turkish citizenship" will be amended to read "Turkish Republic citizenship." The package will include a number of amendments on basic rights and liberties, a consensus for which has already been established by the most part by the Reconciliation Commission. The AK Party is expected to include these items in full to their own package and may even include all articles a consensus had been reached on by the parliamentary commission.