Turkey shuts down border with Syria 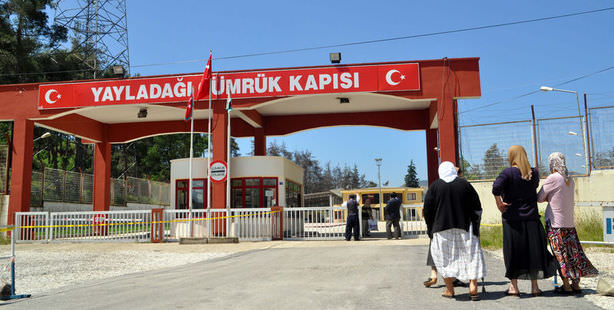 Turkey has closed down its side of the last border crossing with Syria still controlled by President Bashar al-Assad's government, stepping up security following two deadly bombings this month.

Customs and Trade Minister Hayati Yazıcı announced in a written statement on Tuesday that the Yayladağı Border Gate in Hatay connecting Turkey with Syria will remain temporarily closed for at least a month as a security measure.

Customs Minister Hayat Yazıcı said the Yayladağı gate, some 90 km from Reyhanlı, would remain closed for a month, during which only Turkish citizens arriving from Syria or non-Syrians transiting through Turkey would be allowed to cross. Nobody would be allowed to cross from Turkey into Syria. The gate was initially shut the day after the bombings to prevent the attackers from fleeing to Syria. Yazici stated that certain restrictions had been imposed on the Cilvegözü, Öncüpınar, Karkamış and Akçakale border gates for security reasons since last summer. However, the Yayladağı border had up until recently maintained normal crossing procedures.

"We have been closely observing and controlling the border gate, which is the only one that allows crossing between Syria and Turkey. After the deplorable incident that took place in Reyhanlı, we temporary shut down the border to prevent the perpetrators from fleeing. We have assessed the situation since then with the Hatay Governorship and informed them of the decision," stated Yazıcı.

ENTRANCES ONLY FOR ONE MONTH

Explaining the reason behind the security-based decision, Yazıcı underlined that there was no infrastructure in place to prevent potential security risks.

"We either have to conduct body searches of every single person that crosses through or we have to develop other methods. The gate does not have a strong infrastructure, nor does it make a strong economic contribution to our country," pointed out Yazıcı. A Turkish official in the region said the border closure would now allow time to station bomb-detecting equipment at the crossing.

"As of today, we will be halting all border crossings from Syria into Turkey in order to prevent any unfortunate incident. For a one-month period, we will continue to serve Turkish citizens that had previously entered Syria and want to return as well as foreign nationals using Turkey as a transit location from Syria. If in a month's time we have been able to realize all of the infrastructure and security measures intended, then the Yayladağı Border Gate will be reopened at that time. If however, we are unable to facilitate the improvements we want to make, then the border gate will be closed to crossings entirely," stated Yazıcı.