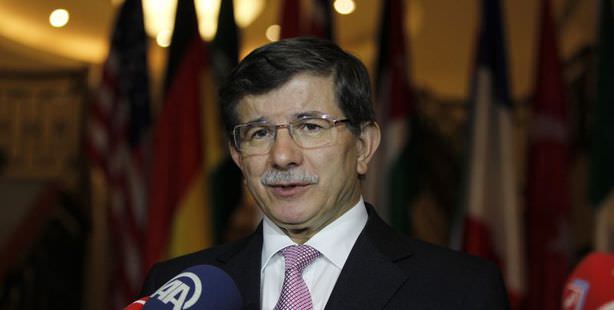 Foreign Minister Davutoğlu says that a new transitional period needs to begin in order to build a strong Syria that reflects the public will. “No one who has blood on their hands should be a part of this transitional government,” said Davutoğlu.

Speaking to reporters at a press briefing at Ankara's Esenboğa Airport, Foreign Affairs Minister Ahmet Davutoğlu stated that it was time that a new transitional period being in Syria in order to build a strong nation reflective of the will of its people. "No one who has blood on their hands should be a part of this transitional government," said Davutoğlu who was to depart for a Friends of Syria Group meeting held in Amman, Jordan on Wednesday.

Foreign Minister Davutoğlu said that the ongoing tyranny in Syria must come to an immediate end and emphasized that no one who has been involved in the violence should take part in the formation of a new transitional government to lead the nation to democracy and independent elections.

Prior to departing for the Friends of Syria Group meeting being held in the Jordanian capital, Davutoğlu told reporters that Turkey's position in regards to the crisis in Syria has always been extremely open and clear. "A new transitional period needs to begin in order to build a strong Syria that reflects the public will," said the Foreign Minister.

Davutoğlu went on to remind that during the first Geneva meeting held on June 26, 2012 under Turkey's pioneering, a decision was reached in principle to establish a transitional government which would take on all of the executive power. The second decision reached on principle was to "establish a consensus on both sides regarding who would take part in this transitional government, however that excludes anyone who has blood on their hands," said Davutoğlu, going on to state, "Turkey has always maintained its diplomatic support and has always exerted efforts to the effect of establishing a permanent solution within the framework of these principles. With recent developments, negotiations on a variety of formulas are presently ongoing," stated Davutoğlu.

"WE WILL SUPPORT DIPLOMATIC EFFORTS"

Noting that what stages the transitional government will have to pass in its formation is something that will be established through meetings and deliberations, Davutoğlu went on to state the following: "Our issue and message in Amman is clear. Eleven nations had already reached a consensus on all of these issues in Istanbul. We then went and reestablished this agreement in a regional sense with six different nations. In other words, I hope that we will be able to progress our efforts to an advanced level within the two frameworks of ensuring no one who has blood on their hands is a part of the transitional government and for the support and furthering of all forms of diplomatic efforts."

PM ERDOĞAN TO VISIT REYHANLI ON MAY 30

Prime Minister Recep Tayyip Erdoğan met with Saudi Arabian Crown Prince Salman Bin Abdul Aziz, Deputy Premier and Minister of Defense at the official Prime Ministry Residence in the capital. The situation in Syria was just one of the topics discussed in the hour-long meeting.