The EU’s most powerful figure is in Ankara 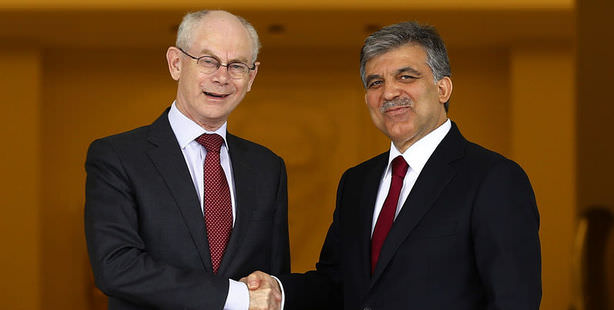 Arriving upon invite by Prime Minister Erdoğan, EU Council President Rompuy told Gül, “I have brought a message to revitalize EU negotiations with Turkey. During his stay, Rompuy also met with opposition parties CHP and BDP.


While Rompuy traditionally maintained his distance to the issue of Turkey's EU membership bid, especially during his term as Belgium Prime Minister, this two-day trip is intended to become the start of a new era in which this situation is turned around. Rompuy is becoming an increasing significant figure within the union. Having been brought in as EU Council President in 2009 as per the Lisbon Agreement, Rompuy's term, which was supposed to come to an end last year, has now been extended until November 30, 2014.

MEETING AT THE PRESIDENTIAL PALACE

Rompuy first met with President Abdullah Gül yesterday in a meeting which was centered on Turkey's EU membership process as well as the crisis in Syria. Rompuy expressed that he was bringing a political message for the restoring of talks between Turkey and the EU. Gül responded by stating that it would be to the advantage of both sides if certain EU member nations were to abandon their negative stance on the restoring of negotiation talks.

In a meeting with Prime Minister Erdoğan, Rompuy expressed that the issue of visa exception was on the top of their agenda and is a step they feel needs to be taken as soon as possible. Rompuy also said that they are working on changing the process which has resulted in Turkey's Prime Minister not being invited to take place in EU leadership summits since 2004

Rompuy also met with members of the main opposition Republican People's Party as well as the Kurdish nationalist opposition Peace and Democracy Party (BDP). During the meeting with CHP Chairman Kemal Kılıçdaroğlu, which lasted approximately half an hour, Rompuy stated that they find the ongoing resolution process to be extremely significant and historic. Kılıçdaroğlu in return expressed that they also want the attempts to reach a solution to conclude peacefully however, he said, "We do have significant concerns."

Rompuy also met with a BDP delegation led by Deputy Chairman Gültan Kışanak and asked if they were hopeful on the prospects of reaching a solution to which the delegation responded by stating, "We have no other motivation than hope. If we aren't going to fight, then we want to have hope."

This is a translation of an article originally written by Mehmet Ali Berber, Evrin Güvendik and Hazal Ateş.