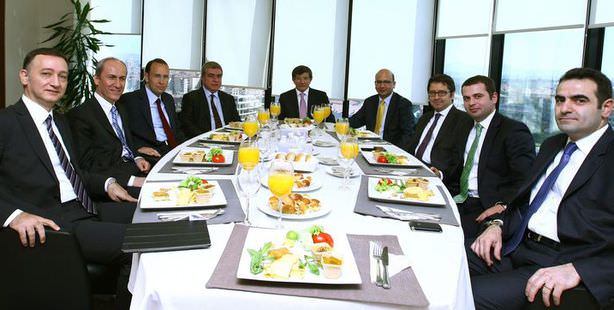 Sharing details with Sabah on the exclusive dinner shared between Prime Minister Erdoğan and himself with President Obama and his U.S. counterpart as well as the two nations’ security and intelligence officials at the White House, Foreign Minister Davutoğlu relayed a quote from Dan Brown’s new book featuring Turkey entitled “Inferno”, “The darkest places in hell are reserved for those who maintain their neutrality in times of moral crisis,” in reference to CHP Chairman Kilicdaroglu’s stance on Syria.

Upon returning from his trip to Washington where he accompanied Prime Minister Tayyip Erdoğan, Foreign Minister Ahmet Davutoğlu paid a visit to Sabah Newspaper during which he shared critical details of the exclusive dinner held between U.S. President Barack Obama and Prime Minister Erdoğan in the Red Room at the White House.

The following are a series of excerpts from the talk with Foreign minister Davutoğlu who relayed the topics discussed during the special dinner held at the White House and said that no peace formula will be effective when it comes to Syria if it is not suffice enough to persuade refugees that there is a chance for a peaceful transition to democracy in their country:

ALL OPTIONS WERE LAID TO THE TABLE AT THE WHITE HOUSE: "All possible scenarios were discussed during the dinner held at the White House. A consensus was reached regarding the United States increasing their contribution. The opposition will be supported. Turkey is not alone."

(In regards to a no-fly zone) "The decision needs to be made by the United Nations. Lighter decisions have been vetoed by both Russia and China."

When asked if NATO will come into play, Davutoğlu stated, "We talked about all of the possible scenarios in the US. Syria was the sole topic of discussion in the Pentagon as well."

A MESSAGE THROUGH DAN BROWN: Even the new book by Dan Brown, "Inferno" was referred to during the meeting…

Mentioning a quote from the book which reads, "The darkest places in hell are reserved for those who maintain their neutrality in times of moral crisis," Davutoğlu said that the reason that Kılıçdaroğlu's meeting was cancelled with the leader of the European Parliament's Socialist group is the fact that never mind his neutral stance, he is taking the side of creating a moral crisis.

CONDITIONS FOR PEACE IN SYRIA: "A decision needs to be established without any ambiguity. A transitional government needs to be formed through a mutual consensus. Those whose hands are bloodied should not have any power in Syria's politics and the full power should be handed over to the transitional government… It is obvious that it won't work if some are saying that those who have committed murder should remain in power."

THE ANKARA CRITERIA:"The government to be formed should be of the caliber in which our 200,000 Syrian brothers staying in our camps will say, 'peace has come to our nation' and they will return to their country. There is no chance of any formula for peace to be established that does not persuade the refugees in our country to this extent. This is our sole criteria."

PSYCHOLOGICAL OPERATION: "It is being reflected that our U.S. trip was successful however our Syrian policy was not. Foreign policy is an entirety. If Turkey had remained neutral as innocent civilians were being killed in Syria. If we had said, 'I am not getting involved' and closed the door, then where would we have experienced this honor?

The recent allegations are all a part of a psychological movement targeting our government. Nobody should attempt to make Turkey pay for the mistakes made by the international community."

THE GENEVA II APPROACH: "There is an opinion being formulated that Turkey has objected to the second Geneva meeting and it is being held regardless. This is an intentional deviation. Turkey is one of the two or three main actors that ensured Geneva I fruitioned. We would never be against any international initiative geared towards fulfilling the public's wishes. However, we will not allow for ambiguity, even if it is constructive, solely for the sake of appearances. Between the timeframe of Geneva I and Geneva II, there have been 80,000 people killed. We are saying that it is not right to grant Assad more time to oppress his people."

"For a regime that has staged massacres of this gravity to remain in power is a stain on humanity. Was Milošević allowed to stay in power in Serbia?"

'KILIÇDAROĞLU IS COVERING FOR THE TRUE MURDERERS'

"The perpetrators of the Reyhanlı blasts have nearly all been apprehended. However, have you yet to hear Kılıçdaroğlu condemn the perpetrators?

He calls Mr. Prime Minister, the 'murderer'… The reason why he speaks like this is to cover up the true perpetrators. To accuse the Prime Minister of murder without saying a single word against the real assailants while the pain of having lost 51 citizens still weighs heavily on our hearts, is an attempt to cover up the murder staged by terrorists in connection to Bashar Assad and al-Mukhabarat.

This is a crime. This is collaborating with terrorists. Because not only are they covering up the true perpetrators but they are also being misleading."

SWOBODA'S CONSCIENCE: "Kılıçdaroğlu needs to explain why it is that Assad remains untouchable while the Prime Minister and Foreign Minister of this country are considered deserving of every sort of insult. By conducting this outdated form of politics, you only end up getting yourself rejected by the person who should be your closest comrade, and that is because Swoboda has both a conscience as well as moral principles."