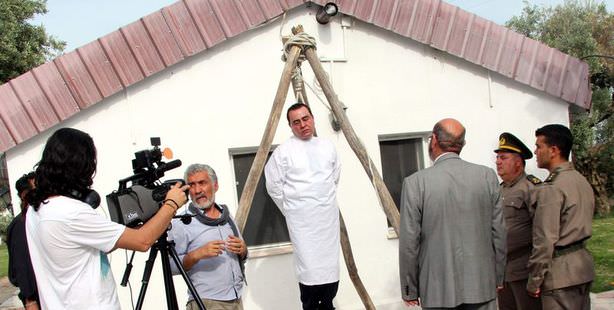 On the 53rd anniversary of the May 27th, 2960 coup, retired Capt. Emanullah Çelebi, who was part of the National Unity Committee, has apologized for the pain and suffering caused by the 1960 coup.

"I want to apologize to everyone who was harmed by the coup," stated 88-year-old retired Capt. Emanullah Çelebi, on the 53rd anniversary of the 1960 coup. Çelebi is one of the seven remaining members of the 38-member National Unity Committee, which was an integral part of both the staging and the aftermath of the 1960 coup.

On May 27, 1960, a military junta overthrew the government of Prime Minister Adnan Menderes and President Celal Bayar as well as other fellow Democrat Party members, which were tried in 14 separate cases by a kangaroo court established on Yassıada, an island in the Sea of Marmara. The trials resulted in 15 death penalties and 12 life imprisonment sentences as well as hundreds of long-term sentences. Politicians were charged with high treason, misuse of public funds and abrogation of the constitution. On September 16, 1961, Prime Minister Adnan Menderes, Minister of Foreign Affairs Fatin Rüştü Zorlu and Minister of Finance Hasan Polatkan were hung on İmralı Island.

Expressing his great regret for having played a role in the coup, Çelebi said that since then he has always expected he would have to undergo trial. "However, I am someone who lives on medicine. My age has progressed. If they call me in to trial, I will be dead by the time I leave. There may very well be a trial regarding the May 27th coup. There is nothing that can't be done in Turkey. Anything can happen," states Çelebi.

Former National Unity Committee member Çelebi explained that due to the fact that a number of high-ranked generals at the time had been appointed by Menderes' Democratic Party itself, it was the lower ranked officers that staged the military intervention.

"I REGRET THE COUP"

Expressing his regret for what transpired at the time, Çelebi provides a view of what it was like for the coup-perpetrators as they sought out the death penalty for Adnan Menderes, Fatin Rüştü Zorlu and Hasan Polatkan.

"I was not in favor of capital punishment. Even if they hadn't been martyred, the Armed Forces would have still overthrown the government. The Armed Forces held a meeting to discuss the executions. They ordered the death penalty for 15 individuals and said that if they weren't all hung, they would then stage another military intervention. Former Colonel Talat Aydemir and his comrades were going to overthrow the government. Then they asked us what we thought about the executions. I told them that I felt hanging Celal Bayar (president at the time) would suffice. What I was trying was a tactic, but it didn't work. Talat Aydemir asked me if I was scared. I was upset by this and responded, 'If I had been scared I wouldn't have talked from Tokyo like you did or like our other friends from London or from the United States.' Celal Bayar was over 65 years-old. I thought it wouldn't be possible to execute him. I have never approved of nor recommended military interventions. However, according to the conditions at the time, it was the right thing to do. It would not be right now. I want to apologize to everyone who was harmed by the coup."

The scene of former Prime Minister Adnan Menderes' hanging was filmed a day before the coup's 53rd anniversary as part of a scene for an upcoming documentary entitled, "Roads and Thorns: Adnan Menderes". An emotional scene was shot yesterday for the documentary which recaptured the hanging of the former Prime Minister. Produced and directed by İsmail Gülnar, Menderes is played by Oğuz Gürol oynuyor. Cemal Gürsel is played by Selçuk Uluergüven, Fatin Rüştü Zorlu by Tuncay Aksakal and Hasan Polatkan has been brought to life by Cengiz Çakır. "It has been very emotional for me from the start to portray this role. We are all extremely pleased to be able to volunteer our time to reflect a hero of this caliber," stated lead actor Gürol.