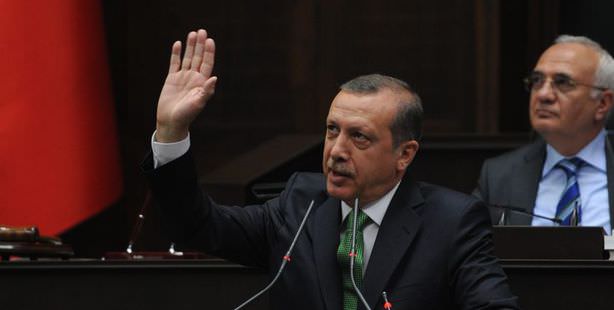 Announcing that evidence proving the guide who took a CHP delegation to meet with Syrian President Assad is the same individual who staged the Reyhanlı bombings has been handed over to the judiciary, Prime Minister Erdoğan called on CHP leader Kılıçdaroğlu, who he accused of treason, to resign.

Addressing fellow party members, Prime Minister Erdoğan stated that an individual who transported members from CHP to Damascus and secured a meeting with the main opposition delegation and Syrian President Bashar al-Assad was the same individual who organized the Reyhanlı bombings as well as planned an attack on Akaydın Camp, which was prevented. Accusing CHP of attempted treason and for being in contact with the Reyhanlı perpetrators, Erdoğan called on CHP Chairman Kılıçdaroğlu to resign.

"There are intentions to wage a truly dangerous campaign in Hatay. This campaign is being staged outside of Turkey. The activities, which are tantamount to treason, of certain dark individuals in Hatay acting as journalists, merchants and business men have been established and a number of arrests made," said Erdogan adding that the attempted attacks on Syrian refuggees in Hatay and surrounding districts are the resut of this external structuring.

"I am calling on the CHP and its Chairman to cautiously keep its distance from these games being played against Turkey," said Erdoğan, calling the attempts to provoke Reyhanlı following the attack an extremely organized psychological act. The prime minister also noted that in the history of Turkey there has never been such a case in which a political party was so embedded in these types of dark relationships and conspiracies. Erdoğan also referred to the CHP Chairman's accusations that the prime minister is a terrorist leader as being a result of the guilty conscience of having taken part in such dark scenarios and losing all sense of reality.

"Two delegations from CHP met with dictator Assad and had photographs taken. Plans were made for the May bombings in Reyhanlı and the attack on Apaydın camp. Plans were also made to explode and smuggle bombs in refugee camps. All of these attacks were prevented before they were realized. All of these operations and bloody conspiracies were planned by a dark figure posing as a businessman in Syria. He is now in Syria and cannot enter Turkey. He used to work with Bashar's father Hafez al-Assad. Certain individuals in Turkey were used as tools and accomplices. They leaked information and documents. The relative of a CHP deputy was also involved in these scenarios," stated Erdoğan.

YOU ARE NOW EMBEDDED IN TREASON

"The man who took the CHP delegation to Assad, the man who acted as their guide, is the same individual who staged the Reyhanlı attack as well as the other planned attacks that were prevented.

I am not talking about a taxi driver, chauffer or any sort of tourism company... The individual who greeted the CHP delegation, took them from Latakia to Damascus, participated in the talks held with that same delegation and who has been captured in photographs of the meetings is the same individual who planned these attacks," stated Erdoğan.

The Prime Minister went on to explain that testimonies and all evidence has been submitted to the judiciary. This includes intelligence photos of the vehicles used and their licenses. "The CHP Chairman and his deputies are taking part in an extremely dangerous game. The CHP is obliged to provide a satisfying explanation on the issue. In fact, the Chairman and the party's deputies should resign immediately, and I mean immediately. CHP has attempted treason; they were in contact with these individuals," stated Erdoğan.