Celebrations of Istanbul’s conquest held on the Golden Horn 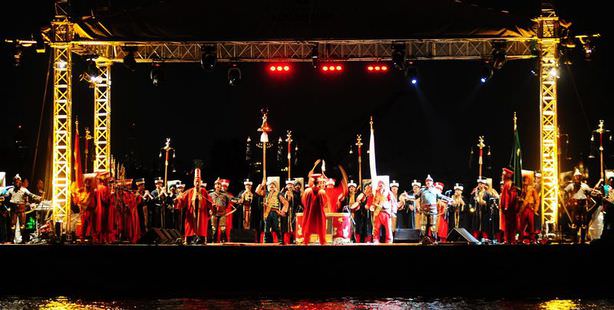 A grandiose celebration was held on the Golden Horn on Wednesday evening to commemorate the 560th anniversary of the conquest of Istanbul by the Ottomans.

On May 29th, 1453 Mehmed the Conquerer, also known as Fatih Sultan Mehmet, completed the Siege of Constantinople, by turning what is now Istanbul into the capital of the Ottoman Empire. A platform was erected on the shore and fireworks were set off along the Golden Horn, referred to as Haliç in Turkish, Wednesday evening where celebrations of the 560th anniversary of the momentous event were held in full glory.

Istanbul Mayor Kadir Topbaş came out for the festivities as did an extensive number of guests and city residents. A platform stage was erected along the Balat shore. The evening's program commenced with light, sound and water shows then continued with a special showing of the film "The Conquest 1453" as the audience watched while waving Turkish flags. The Chief of General Staff Military Museum and Culture Site Mehteren Division janissary band performed later followed by a dazzling fireworks show. Thousands of fireworks were accompanied by a lights, water, sound and laser show which mesmerized the Istanbullites that had come out to celebrate. Many citizens recorded the festivities with video cameras and cell phones.

This is a translation of an article originally written by Zeynel Yaman.