PM Erdoğan: I am not a king, I am a prime minister elected to serve you 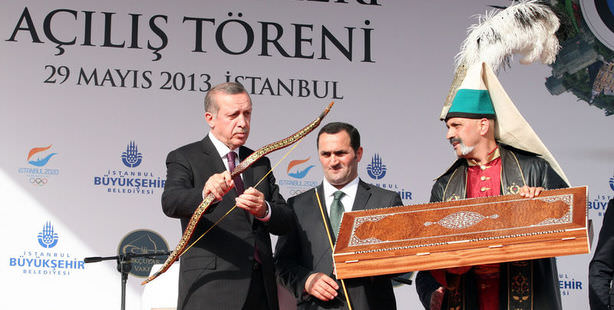 During an opening for the new Archers’ Lodge in Okmeydanı, located in Istanbul’s Kasımpaşa district, Prime Minister Erdoğan responded to chants from the crowd stating, “The king of prime ministers hails from Kasımpaşa,” by stating, “But I am not a king. I am a prime minister elected by my people’s votes to duty. I am your servant and not your master.”

Prime Minister Recep Tayyip Erdoğan presented awards to the winning archers of the traditional and modern archery competitions played for the Fetih (Conquest) Cup held by the Okmeydanı Sports and Education Foundation. The crowds greeted Erdoğan by chanting, "The king of prime ministers is from Kasımpaşa," in reference to the area where the premiere hails from. Erdoğan responded by answering, "But I am not a king. I am a prime minister elected by my people's votes to duty. I am your servant and not your master."

Prime Minister Erdoğan went on to share the significance the region has for him by stating, "This is a very meaningful place for me. I played football here for nearly 15 years. This is where my childhood took place. Our home, where we were born and grew up is just 500 meters behind here. We brought up our children there. God blessed us with four children and all right here in the Kasımpaşa, Kaptanpaşa neighborhood. Therefore, we have very different memories here. We remember a time when these houses didn't exist. We remember when there used to be arrow mark stones, now they have only been able to find 26. Fatih Sultan Mehmet's armies would set out from here. They would do archery and shoot arrows. Now history is arising. Hopefully Okmeydanı which in the past was the global center for archery will continue to rise to that position once again today and in the future."

In a message released for the anniversary of the 560th year of the conquest of Istanbul, Erdoğan stated, "Istanbul, where different cultures co-exist in peace, continues to be a city that embodies the "alliance of civilizations."