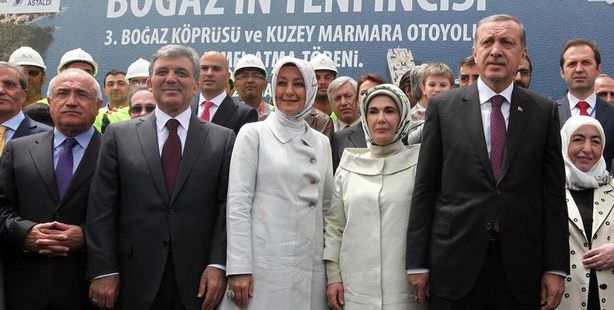 Istanbul will soon be host to a third Bosporus Bridge, which will be the largest suspension bridge in the world. President Gül revealed the name of the new bridge to be Yavuz Sultan Selim, while Prime Minister Erdoğan announced, “We are writing history on the 560th anniversary of the conquest of Istanbul.”

Wednesday, May 29th marked the 560th anniversary of the conquest of Istanbul by the Ottomans. The groundbreaking ceremony for the third Bosporus Bridge and the North Marmara Highway was aptly held yesterday as the name for the new multi-billion dollar bridge was revealed by President Abdullah Gül to be Yavuz Sultan Selim, the notorious Ottoman Sultan referred to as Selim the Grim, under whose leadership the Ottoman Empire entered an era of its greatest power. Yavuz Sultan was the grandson of Fatih Sultan Mehmet for which Istanbul's second Bosporus Bridge was named after.

Reminding that the day marked the celebration of the 560th anniversary of the Ottoman conquest of Istanbul, President Gül stated that the groundbreaking ceremony will always be remembered as a significant event to mark that they have left the dark days of Turkey in their wake. "Taking on these projects was not an easy task. Every government aspires to be able to do this; however do they have the power? Do they have the opportunities? Thank goodness our country has now reached the level it is at today. We have now reached a level of being to realize projects of this scope in a short amount of time," said Gül, noting that the Prime Minister was the one who granted him the honor of announcing the name of the new bridge.

Speaker of the Parliament Çiçek stated that Turkey has now become the type of country that is able to spend three billion dollars on just a single project. Emphasizing that the true definition of terrorism is obstructing Turkey from being able to realize these types of projects, Çiçek warned, "As a nation, we need to ensure that we do not fall into these sorts of traps."

During his address, Prime Minister Erdoğan read aloud in Arabic a famous saying by the Prophet Muhammad: "Verily you shall conquer Constantinople. What a wonderful leader will he be, and what a wonderful army will that army be!" Noting that 560 years ago Fatih Sultan Mehmet, otherwise known as Mehmed the Conquerer altered the course of history when he conquered Istanbul, Erdoğan stated, "Today, on the 560th anniversary of the conquest of Istanbul we are once again writing history in your presence. We are once again laying the groundwork for a mega project."

Erdoğan went on to deliver the following messages during his historical address:

THIRD AIRPORT: "Today we are building the third bridge. We recently held a tender for a third airport in Istanbul, which with a 100 million person capacity will once again be an extremely talked about airport in the world."

CANALISTANBUL: "We will be holding a new tender soon for CanalIstanbul. Now there will be a lot of people that will have something to say about this. They may scream and yell, but we have work to do. They don't realize how many twists and turns and problematic areas there are on the Bosporus. However, we have learned this lesson well. We cannot forget what happened with the Independenta. We cannot forget how much fear this ship that burned for seven months aroused in Istanbul. However, they have no such concerns."

MARMARAY: "Of course this doesn't come to a close with CanalIstanbul. On October 29 we will be opening up Marmaray. Thank God we have been given the opportunity to construct this rail transport system. Just slightly south there will be two tunnels that pass under the Bosporus that will allow vehicles to come and go. Did they ever conceive of such investments? A rail system under the sea, with cars passing across, never would they have conceived of this. If they had, they would have done it themselves up until now. However, we have been able to fit this in over the past ten years."

TAKSİM GEZİ PARK: Erdoğan also commented on the recent gathering of protestors at Taksim's Gezi Park after construction machinery began uprooting trees in the park Monday and Tuesday. Announcing that they will not be backing down under any circumstances and that the decision for the demolition has already been made, the Prime Minister said, "We do not create words, we create work. If you have any respect for history, then you should go and research the history of this site they call Gezi Park. We will be reviving history there and will be making the area a pedestrian zone to present to the public. During the AK Party's term in power, we have planted nearly 2.5 billion trees," said Erdoğan, pointing out that the reason being is that they are environmentalists."

FORESTS: "We have determined the route for the bridge in a manner that will ensure the preservation of forested areas such as the Belgrad and Fatih forests and the Polonezköy National Park. We have also taken into consideration the preservations of ponds and reservoirs. We especially established the route to be outside the perimeter of the pond basin borders as well as to ensure water quality preservation. This project will be a source of pride for our nation; it will shine like a star. When completed, we will have signed on to a worldwide record. That is because the cost of this project is around three billion dollars. However, the true figure will be more around 4.5 billion liras. In all aspects, this bridge stands to be an exemplary project for the world."

OBJECTIONS WITHOUT AN ALTERNATE SOLUTION...

DAMAGE OF THREE BILLION LIRAS INCURRED: "The number of vehicles in Istanbul is nearing three million. Eighty-seven percent of all urban transportation is done via highways. While there should be only 250,000 vehicles crossing over both bridges in Istanbul daily, this figure is actually nearing 600,000. In other words, these bridges are working at 2.5 times their capacity. It takes an hour to cross the Bosporus due to the build-up of vehicles along the highway. The lines resulting when the bridges undergo maintenance causes three billion liras worth of economic loss in both labor force and fuel costs annually. Those who are against the building of a third bridge in Istanbul have yet to come up with a solution that will put an end to these losses, nor will they," stated Erdoğan.

BARGAINING ON THE PODIUM

Prime Minister Erdoğan invited İçtaş Construction Executive Board Chairman İbrahim Çeçen to the stage yesterday to request the firm complete the project within two years time. İçtaş along with Italian construction group Astaldi consist of the consortium which were the tender winners of the project. In response to the request the project be completed by May 29, 2015, Çeçen said his partners would have to also deliver the same promise to which Prime Minister Erdoğan then called up representatives from Astaldi and Hyundai to which he said "Quickly, quickly" in English. Hyundai, which the consortium has assigned to building the bridge's lateral towers, aprons and suspension cables will play a crucial role in constructing the bridge, said Erdoğan, adding; "So instead of 12 hours a day, they will work 24 hours a day. And we will do all that we can to offer our support. Hopefully in two years' time from today, we will all be here together again for an opening ceremony."

The Yavuz Sultan Selim Bridge was designed by Michel Virlogeux, a structural engineer famous for being a "master French bridge-builder" and Swiss firm Ti Engineering. Virlogeux has built a number of famous bridges including the Vasco da Gama Bridge in Lisbon, the design of the Millau Viaduct and the Normandy Bridge, which held the world record for longest cable-stayed bridge for four years.

This is a translation of an article originally written by Mesut Er and Hasan Ay.