Provocateurs take to the streets! 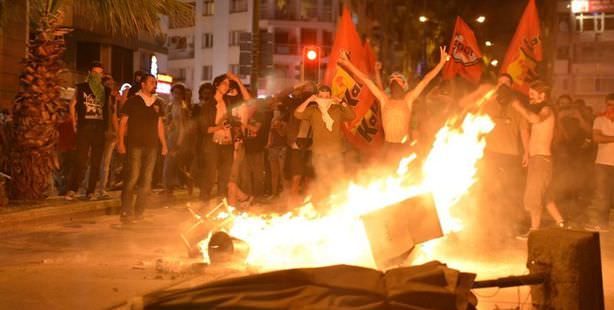 Despite the court ruling released yesterday regarding halting the construction of the Artillery Barracks in Taksim’s Gezi Park, the protests that originally began days ago as a demonstration to save the trees have now escalated into nation-wide demonstrations.

Conflict between protestors and police continues in Istanbul's popular and historical Beyoğlu district. Demonstrators have set up a barricade on Halaskargazi Avenue in the Şişli district in an attempt to enter Gezi Park. Police are having a hard time getting past the barricades.

The escalation of events which began yesterday morning, continued on into the night. Demonstrators, which have blocked off Halaskargazi Avenue, continue to resist the police, which have used cannon water shot from riot control vehicles (TOMA) to disperse the crowds. As police tried to break through the barricade they were attacked by stones and whatever else demonstrators could get their hands on. The conflict spread into side streets as well as İstiklal Avenue and lasted way into the night. Enraged demonstrators in Tarlabaşı proceeded to set fire to the construction materials being used in the redevelopment of Taksim Square. As the construction site went up in flames, crowds of protestors proceeded to chant slogans and throw stones at security officers. One woman was injured from retaliatory fire of tear gas by police. As the injured woman was taken by private vehicle to Taksim Emergence Car State Hospital, demonstrators were seen taking apart the pavement stones which they threw at police officers. Police continue to fend off protestors throughout the city.

A march was staged in Izmir in solidarity for the ongoing demonstrations in Istanbul which erupted over the intended demolition of Taksim's Gezi Park. After the march dispersed, nearly 100 demonstrators began attacking police with stones, bottles and sticks. Police intervened with cannon water, however the rioting continued. Covering their faces with masks, demonstrators broke off stones from the sidewalks and set off fires in the middle of the road as police intervened with pressurized water and later closed off traffic access to Basmane Square as the tension escalated.

Protests for what started in Taksim Gezi Park spread to the capital yesterday with certain civil society organizations, unions and political parties holding demonstrations in the city's Kuğulu Park. Due to the demonstrations, all surroundings roads were closed to vehicle traffic. CHP Deputy Chairman Adnan Keskin as well as CHP deputies Aylin Nazlıaka, Bülent Kuşoğlu, İzzet Çetin and Levent Gök were amongst the protestors chanting slogans in support of Taksim's Gezi Park and against the government.
Meanwhile, a group left the park to head towards the Kızılay district where the U.S. consulate is located. Police set up a barricade around the U.S. Embassy and had to suppress protestors with tear gas and cannon water. However, protestors continued to strike the steel barricades and police proceeded to shut down traffic in the area. A number of small-scale incidents occurred in the region resulting in certain shop and bank windows being smashed in. Protestors later returned to Kuğulu Park where protesters continue to demonstrate while also singing songs.

A group attacked a riot control vehicle parked waiting on Atatürk Boulevard for security purposes. Police responded with pressurized water to the group who was seen writing anti-government slogans along the road. Approximately 15 arrests were made in the capital last night.

A group in Adana also protested the developments regarding Taksim's Gezi Park. The group consisting of members of certain political parties and fans of football teams gathered at Atatürk Park. The group held up signs and danced folk dances then held a sit-in before dispersing. Popular rock star Hayko Cepkin, who was in Adana for a concert, told journalists that when he heard there was going to be a demonstration he wanted to come out to show his support.

In Eskişehir, the scene was reminiscent of what was transpiring in Taksim as students and police battled the whole night through. A group of nearly 500, mostly university students, initiated conflict with police along Üniversite Avenue. The group threw bricks, stones and other similar items at riot police who responded with cannon water and tear gas.

The group dispersed into alleyways only to regroup and continue protesting. Some citizens ran into apartment entrances and shops to escape the tear gas. Protestors continued their outburst and proceeded to set trash cans on fire.

Meanwhile, police unsuccessfully tried to prevent approximately 300 students staying at the dormitory next to Eskişehir Osmangazi University (ESOGÜ) from marching to the city center. A significant number of police and citizens were affected by the tear gas. The conflict between protestors and security forces continue in a number of spots throughout the city.

In Aydın, protestors gathered late in the evening to protest the developments surrounding Taksim's Gezi Park. The student's staged a sit-in at the Abide Junction as they consumed alcohol and chanted anti-government slogans.

At approximately one a.m., crowds gathered in the Aydın city center and marched from the İstasyon Square to Adnan Menderes Boulevard. The group later staged a sit-in in front of the AK Party Provincial Headquarters. The protest lasted approximately two-and-a-half hours as demonstrators closed off access to the street and chanted slogans, with some evenly openly consuming alcohol. Demonstrators also reacted to police officers attempted to secure the area. Police refrained from intervening and the group dispersed without incident.

After the widespread demonstrations that took place in Aydın late last night, marches were also staged in Muğla. Police intervened with the groups which included university students. The marches still continue.

When demonstrators, who marched to Uğur Mumcu Boulevard, began outbursts, police intervened with tear gas. At present, protestors, including university students are still out demonstrating.

Police intervened with a group of university students that came out to protest the Taksim Gezi Park incidents. The students organized over social networking websites and gathered in Konya's Bosna Hersek Park to stage a march. They began chanting slogans and police intervened. Meanwhile, groups with opposing views also began intervening with the protestors who ran into side streets where they continued demonstrating. A part of the group which had been dispersed regrouped and headed towards Gençlik Park, where reinforced riot police forces intervened, breaking up the group once again. Once the protestors were dispersed, riot police closed off traffic to Mesaj Avenue and intense security measures were enforced. Meanwhile, the opposing group began chanting against protesters. Once tension settled, traffic resumed and according to the information obtained no one was injured or arrested.