PM Erdoğan: Twitter is being used to spread disinformation 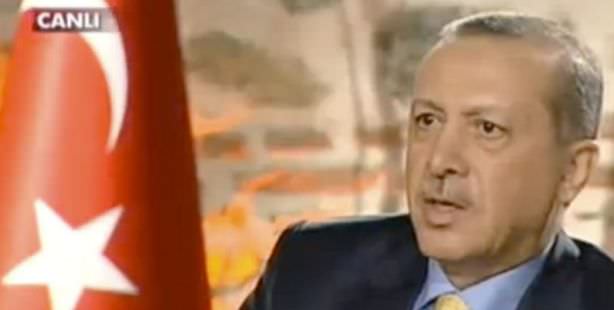 Speaking on a joint television broadcast on Sunday, Prime Minister Erdoğan offered an evaluation of the recent developments in Turkey.

Prime Minister Recep Tayyip Erdoğan commented on the protests triggered by redevelopment plans on Taksim's Gezi Park during an interview broadcasted live on a number of national television channels.

"Despite all of the negative developments, for example, not a single member of MHP (Nationalist Movement Party) has gotten involved. In fact, even BDP (Peace and Democracy Party) has refrained from being involved. CHP (Republican People's Party) is at the center of this and in doing so, they have remained on their own," said Erdoğan in reference to the three opposition parties.

Providing information on the vandalism that has transpired thus far in the Gezi Park protests Prime Minister Erdoğan stated, "According to official figures, between June 1, 2013 and June 2, 2013 at 11:00 am, 89 police vehicles, 42 private cars, four buses, 18 municipality vehicles, four of our buildings, 94 businesses, one home, one police station and a number of bus stops have been set on fire, destroyed and damaged."

Prime Minister Erdoğan also expressed plans to build an extensive national library in the 250-year-old Rami Military Barracks in Istanbul's historical Eyüp district."The Rami Barracks will be turned into a national library. Now they will also raise hell about this as well. There is nothing left of the Rami Barracks at present anyway," said Erdoğan.

"Every country has its own unique structure. People also contain certain formations in their genes. Certain people may not be able to leave when they enter certain locations and they may terrorize those places. We have also taken steps there. First and foremost we were not in the position to fail to respond to their manner of their approach. However, we were sincere in our approach," said Erdoğan.

The Prime Minister went on to comment on the dissemination of misinformation by stating, "There is now a trouble called Twitter. This is where unmitigated lies are being dispelled. In my opinion, this thing that is called social media is actual a troublemaker for society."

Criticizing false tweets being posted on Twitter such as, "They will hang them from trees" and that "hundreds of Islamists are heading to Taksim with Kalashnikovs," Erdoğan said, "This is how society is terrorized. They have even published photo shopped pictures of casualties.

In reference to the widely attended AK Party meeting in Istanbul's Kazlıçeşme district, Erdoğan stated, "They have gathered 20,000 in Taksim, well I can bring out 500,000 in Kazlıçeşme. "We have this sort of opportunity and power. My party base has been calling us constantly to ask, 'Are we going to remain silent through all of this?' However, we have remained calm."