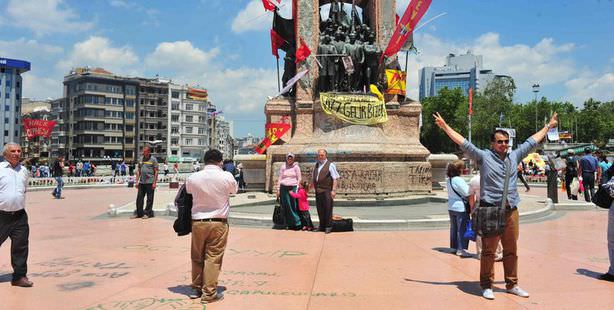 Peace has prevailed in Taksim’s Gezi Park since police forces withdrew from the site that sparked nationwide demonstrations which have been ongoing for days now. In the capital Ankara however, demonstrators gathered once again forcing police to intervene. In Izmir, arsonists set the AK Party’s Karşıyaka district building on fire using Molotov cocktails.

Since police forces withdrew from Taksim's Gezi Park two-days ago, the spot which has sparked nationwide protests has maintained a calm atmosphere. Although police forces have withdrawn from Taksim Square and Gezi Park, demonstrators continue to hold the fort with tents, food supplies and medical units. Groups of protestors are situated waiting along the barricades set up in demonstrations on all roads leading to Taksim Square.

Businesses and retails shops along İstiklal Avenue, which suffered damage in demonstrations, are beginning to heal their property's wounds. Merchants are working on covering up or removing the slogans in spray paint which adorn their doors, shutters and windows. Some citizens are taking photographs of themselves posing in front of the Atatürk Memorial or overturned cars and buses that line the square. Taksim and the roads that lead into the historical square are now reminiscent of a battle zone. The vehicles and buses that have been overturned and set on fire remain in plain sight. Meanwhile, demonstrators showed up yesterday with trash bags and once again set out to clean the area.

ROADS ARE BEING CLEANED

Municipal workers began in the early morning hours yesterday, using bulldozers to breakdown the barricades set up in the Dolmabahçe vicinity. While the Dolmabahçe-Bomonti tunnel was shut down, traffic in the region was practically at a standstill. Drivers who were stuck in traffic for hours protested the situation by honking their horns.

The Istanbul District Attorney has initiated an investigation into the incidents that have unfolded. Istanbul State Prosecutor Hüseyin Aslan, who is overseeing the investigation, began by ordering an inspection of the footage recorded on city surveillance cameras (MOBESE). Police are closely inspecting the footage in an attempt to pinpoint those responsible for provocations during the riots. Over the weekend, 80 individuals provided testimonies. All those detained in Istanbul have been released. The Istanbul Municipality has released figures that 49 buses, one truck, 30 bus stops and five construction machines were damaged in demonstrations.

On Sunday night, protestors gathered in Dolmabahçe with the intentions of heading towards Beşiktaş; however the security forces in place to guard the Prime Ministry Working Office intervened.

Demonstrators then proceeded to start up a bulldozer that was parked at the İnönü Stadium construction site, which they then began driving down to Beşiktaş. Police intervened by spraying tear gas on the protesters aboard the dozer. A riot control vehicle (TOMA) pulled up behind the bulldozer and demonstrators ran off setting ablaze the construction vehicle.

Demonstrators that were affected by the tear gas sought shelter at the Bezmi Âlem Valide Sultan Mosque in Dolmabahçe. Using the mosque as a makeshift hospital, demonstrators arrived with medical equipment to treat the faint and wounded. Groups that gathered along Barbaros Boulevard and Akaretler were also dispersed by police with tear gas.

Demonstrations continued into the early morning of Monday and were then revived last night. Hundreds of people set off from Taksim intending to march to the Prime Ministry Office and making at all the way to İnönü Stadium where hundreds of people began stoning and throwing sticks at police who responded with water cannon and tear gas. Once the group was dispersed, the barricades set up by protesters were brought down.

PROTESTER KILLED WHILE TRYING TO STAGE A ROAD BLOCK

A vehicle hit two demonstrators who were trying to run after blocking off a road in the Mustafa Kemal neighborhood of Istanbul's Ümraniye. Both were taken to the Göztepe SSK Hospital and 22-year-old Mehmet Ayvalıtaş lost his life while Seyit Kartal remains to be in critical condition.