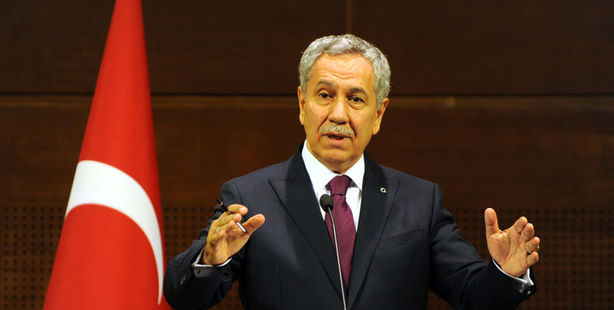 Deputy Prime Minister Arınç held a noon press conference on Tuesday to discuss the nationwide protests after meeting with President Gül earlier in the day. During the news conference he apologized for the excessive police force on peaceful protesters.

Turkish President Abdullah Gül held a meeting with Deputy Prime Minister Bülent Arınç on Tuesday to exchange views regarding the nationwide demonstrations, which were triggered by redevelopment plans in Taksim's Gezi Park.

Acknowledging that the excessive use of force by the police on the initially peaceful group of protestors led to the escalation of events, Deputy Prime Minister Arınç apologized to injured protesters who were trying to express their legitimate environmental concerns, which he said the government respects.

"The excessive violence that was used in the first instance against those who were behaving with respect for the environment is wrong and unfair. I apologize to those citizens," Arınç told the news conference in the capital Ankara. "But I don't think we owe an apology to those who have caused damage in the streets and tried to prevent people's freedom," he said. "What began as a peaceful protest has now been dragged into a very different level," said Arınç differentiating between the peaceful demonstrations held by environmentalists and the violent protests held by marginal groups and stating he would meet some of the organizers of the original Istanbul protest to discuss their concerns. Arınç also noted that the excessive violence and vandalism has begun to decline over the past two days and said, "All of our greatest desire is for peace to be established once again on the streets."

TURKEY'S GREATEST PROSPERITY IS ITS DIVERSITY

"Turkey's greatest prosperity is in its tolerance of diversity. As a government that has experienced constraints on our own lifestyles, we pay extreme sensitivity to ensure that what we had to endure is not imposed on anyone else. We are in no way embracing a mentality of obstinance against society. We are open to all demands; however violence should never be resorted to. We truly believe that we will be able to overcome this situation with tolerance and respect." Arınç called on citizens to not allow the environmental group's demands to be tainted by "marginal and illegal groups."

Deputy Prime Minister Arınç stated that 244 police and 64 demonstrators have been wounded in the protests and offered his condolences for the death of Abdullah Cömert, a citizen from Hatay, and said that reports have verified that the cause of death was not the result of a fired weapon.

"The innocent reactions of our citizens are being misguided by illegal organizations," said Arınç noting that there are presently members from 11 illegal organizations participating in the demonstrations. Reiterating that the initial protests for the redevelopment project in Taksim's Gezi Park were legitimate and patriotic, Arınç once again acknowledged that the excessive use of tear gas and water cannon resulted in escalating tension exponentially. "There are legitimate concerns regarding Gezi Park and we will eradicate these concerns. We will reach a point of being able to hear each other out," said Arınç noting that civil society organizations' concerns should also be heeded in regards to ongoing projects.

TEAR GAS ONLY USED IN SELF DEFENSE

"Police are not acting when there is no threat present. They are only using tear gas in cases necessitating self-defense," said Arınç also pointing out that 110 police vehicles have been destroyed and 207 passenger vehicles set on fire in protests over the past few days. In response to a question, Arınç said that although he was unable to provide precise numbers there are not an excessive number of arrests. "Those detained are released an hour later", responded Arınç, noting that the intention in these detainments is to distance the protestors from areas where violence has erupted. Arınç also stated that rumors they are using Agent Orange are absolutely incorrect.

Commenting on the role social media has played in instigating new provocations Arınç said that although they retain the right to shut down these services they have not done so and said the protests have not only resulted in 70 million TL in damage, but it has also harmed the nation's tourism and during a time in which the weapons of a decades-old terrorism organization have been silenced in the country, one of the fundamental issues they should be currently focusing on.

Deputy Prime Minister Arınç praised the opposition Nationalist Movement Party (MHP) and the Kurdish nationalist Peace and Democracy Party (BDP) for reflecting a level-stance showing "sensitivity" to remaining calm. "I commend the leader of CHP Kemal Kılıçdaroğlu for announcing that he was attending the demonstrations as an individual and not on behalf of his party, however we are expecting the CHP leader to express positivity when addressing the matter. We are also expecting our citizens to exhibit further patience and reason and are expecting unions and NGO's to alleviate the tension," stated Arınç.

In response to a question of whether an apology will come from the government, Arınç stated, "If there are justified reasons then it would be a virtue to apologize." Noting that instead of spraying gas on those acting out of environmental concerns they need to explain the project, Arınç apologized for those who were victims of violence as a result of environmental concerns.

WE TRUST IN THE JUDGEMENT OF OUR PUBLIC

Mentioning that there are attempts to compare what is happening in Turkey to the Arab Spring, Arınç stated that what is unfolding here in Turkey has taken place multiple-fold in Kerry's and other countries. "Our freedom is limited to the freedom of our comrades," stated Arınç.

"The President's comments were extremely constructive on every issue," said Arınç noting that they will be looking into whether there is any area in which they have been lacking and that when it comes to projects in Istanbul the public and the municipality should reach a joint decision. "We trust in the good judgment of our society. We are expecting everyone to put an end to this situation today as people are now living in fear in their own private lives as a result of what is transpiring. Those that are sensible will put an end to these demonstrations today,' said Arınç.