PM Erdoğan: “Everything will be back to normal in a few days” 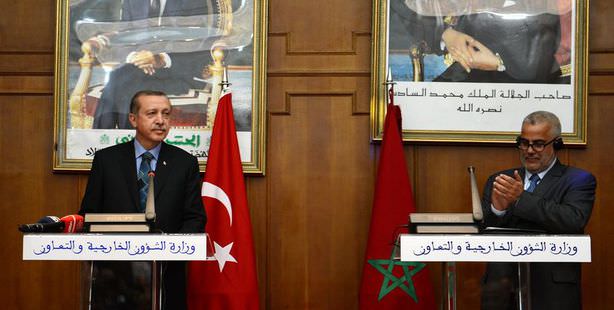 Prime Minister Erdoğan delivered three significant messages in regards to the ongoing protests throughout Turkey: the demonstrations will come to an end in a few days, the content of President Gül’s statement that ‘the message has been received’ is unclear and the road to democracy is through elections.

From Morocco, the first stop on a three-country tour of North Africa, which also includes Algeria and Tunisia, Prime Minister Recep Tayyip Erdoğan delivered a series of messages regarding the progress of the protests which erupted over the uprooting of trees for a pedestrianization project.

Addressing the press during a joint news conference with his Moroccan counterpart Abdelilah Benkirane, Prime Minister Erdoğan said that the demonstrations which began over Gezi Park days ago have begun to let up already and will come to an end completely over the next couple of days.

IT WILL RETURN TO NORMAL: "The situation (in Turkey) now is much more relaxed and the tension has begun to let up compared to five days ago. I believe that common sense has now taken over. I think that in the next few days everything will return back to normal. By the time I return this issue will most likely have reached an end."

YES, DEMOCRACY IS ABOUT VOTING: (In reference to President Gül's comment that democracy is not just about holding an election.)

"In democratic parliamentary systems, the parliament is established through an election and there is no way a system can be democratic if there is not a vote. In a democracy, a stance is the manifestation of the public will."

WHICH MESSAGE IS THAT?: (In response to the question, 'what is the message' posed by an Al Jazeera reporte.)

"When our president said earlier today that 'the message has been received', I have no idea what sort of content he is referring to. One of our ministerial comrades has also released a statement inferring 'the message has been received.' So I asked members of the press, 'Which message did you receive,' and they weren't able to respond with any sort of message or explain any kind of message," said Erdoğan.