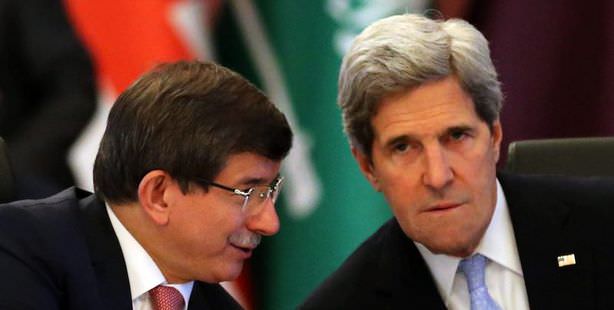 Foreign Affairs Minister Davutoğlu called his U.S. counterpart Kerry to comment on the Taksim Gezi Park protests and to respond to the statements released by the U.S. on the demonstrations, during which he emphasized that Turkey is not a “second class democracy.”

According to information received from diplomatic sources, Foreign Minister Ahmet Davutoğlu paid a call to his United States counterpart U.S. Secretary of State John Kerry to comment on the back to back statements released by the U.S. regarding the nationwide protests.

Informing his U.S. counterpart on the true nature of the unfolding developments, Davutoğlu pointed out that various democratic nations have been faced with similar situations and reminded that a number of lives were lost during the "Occupy Wall Street" protests. Davutoğlu referred to the protests as "tests of democracy" which many democratic nations have endured he remarked.

Underlining the fact that everyone has the right to protest in Turkey, Davutoğlu pointed out that there are marginal groups that are trying to abuse the issue which was protecting the environment and emphasized that Prime Minister Recep Tayyip Erdoğan has distinguished between these two extremes.

Diplomatic sources relayed that Davutoğlu said, "Of course there are democratic demonstrations and we respect that," while also pointing out that public and private property was also damaged in Taksim after the police forces withdrew.

Davutoğlu reacted to the fact that when similar incidents take place in democratic nations it is considered ordinary, however the situation in Turkey is being perceived as "extraordinary" and said, "Turkey is not a second-class democracy."