Is #OccupyGezi a Global Occupation? 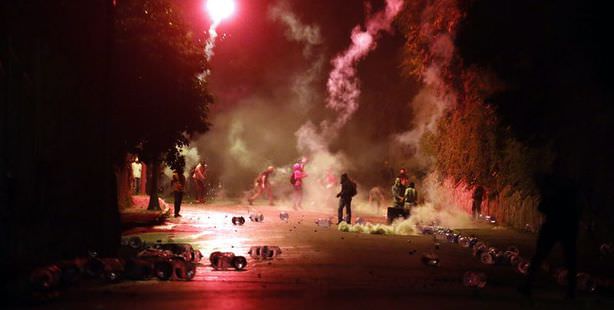 The protests in Istanbul’s Taksim Square have gone from a peaceful sit-in to acts of mindless vandalism.

Gezi Park, previously unknown to most people, is the name of the area that was earmarked for redevelopment into a car-free zone project and the restoration of Ottoman military barracks, which was built in 1780 and remained in Taksim until 1940 when the governor and mayor of the time had it destroyed. Particularly after the first bulldozers began creeping in to the area last Thursday, protests erupted in retaliation in attempts to save trees in the park. In reality, however, it was not an annihilation of thirteen trees that some are talking of – they were merely being transferred from Taksim to another neighbouring area, in order to be able to begin with the project. However, officials were not astute enough to enlighten the public about the real aims of the project – that did not include a shopping center, as Prime Minister Erdogan erroneously blurted out.

Apparently, lack of communication was the main reason leading to the two-fold provocations between police and protestors. First, the sit-in protests were a well meaning exercise for those whose intention was to save the environment. However, when they started vandalizing, breaking into banks, firebombing buses and cars, and attacking innocent civilians, the police had to intervene. Obviously, the excessive use of force by the police – which the Prime Minister criticized – has shown that it was not the government's order to intervene harshly. Police intervention initiated the second step of this current debacle. Independent of environmental concerns, #GeziPark was an incredible opportunity for some anti-government NGOs, main opposition and minority groups to raise their voices against the AKP.

Apparently, introduction of the second step has allowed an unobtainable bargain for a minority who has since gained the support of international media outlets. Without any hesitation, BBC, Al-Jazeera and CNN (along with a host of other online newspapers) have called these protests the beginnings of a 'Turkish Spring' and publicized as headline news. The emphasis of these news giants has inflamed the already visceral enmity against the AKP. Additionally, the use of social media by famous journalists and English-tweeting youth has sparked interest in international media. Evidently, this was an operation executed against Erdogan and his last steps (especially in terms of alcohol restrictions and abortion regulations) that was viewed in some quarters as part of a general conservative agenda and intervention in private life. In terms of abortion, Erdogan has described it as tantamount to "murder" and scolded the rather jaded opposition CHP of leading the nation towards birth control and an aging population. With respect to the alcohol law, Turkey's PM has emphasized that his intention is not to impose anything, rather to present choices, and aiming to harmonize the country with the standards of other developed countries like the UK, France and Sweden. However, when these protests erupted, it was a good occasion for secular minorities who had been waiting for tensions to rise and the right moment to strike for a long time.

The #GeziParki project needs to be considered as a global provocation. The successful governance of Erdogan, who was re-elected with every other vote for the third time in 2011, has annoyed some domestic and external forces. According to the latest polls, solving the Kurdish issue in a peaceful way (a war that has thus far killed more than 40,000 people over the past 30 years) has increased the support for AKP even from the Kurdish and secular wings of society. Israel's apology for the Mavi Marmara attack further popularized Erdogan in the wider region while simultaneously reducing the critics on AKP's policies at home. Owning to the fact that Turkey is the fastest growing economy after China in the world in 2011 and due to the most successful and stable governance in the history of the Turkish government, Turkey was being touted as a role model for post-revolution Arab countries in the region. On the other hand, the rise of the Islamist parties in the Middle East has boosted the fear of Islamization of the region and a possible union – lead by Erdogan – between these countries in the future. However, considering that Erdogan is Obama's favourite and most trusted ally, and especially the peace process with Israel, it is clear that AKP will indeed both work with the new Islamist governments, but will prioritise ties with its Western allies.

Due to Turkey's developments over the last eleven-years, comparing these protests with the Arab uprisings and calling them a 'Turkish Spring' can only lead to a dead-end street. Apparently, this is a wish of the opposition and global actors, who resent Erdogan's global and local success and increased power within the Middle Eastern region. Erdogan's reactions relating to moral degenerations need to be considered as a major project of building a strong nation. On the other hand, despite Erdogan's statements on the new Taksim project, remembering his words about Istanbul's silhouette last week and after announcing that he would meet a group of protesters next Saturday, he will surely consider building a more welcomed project by the majority of the Istanbulites and normalize the ongoing situation.