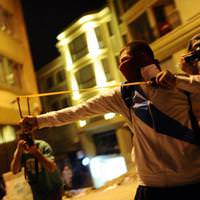 This is a simple attempt to analyze media content on two different occasions; the first quotations refer to the 'Tottenham riots" and the second group of captions obviously refer to the current situation in Turkey. It does not require much to see and understand the content of two underlying completely different messages reported on two similar situations, they just happened to occur in two different parts of the world.

The Tottenham riot, which occurred two years ago, is an interesting example in contrast with the Taksim stories in the international media. The Guardian mentioned in its own headlines at the time that the protests which started in Tottenham (North London) were quite peaceful at the beginning; but then turned into 'hell' after a couple of hours. Although peaceful at the beginning, the media emphasized and focused on the rioting vandalism that occurred. The BBC put a distance between 'violence' and 'right to protest'. As soon as the vandalism occurred, they simply focused on that alone. After these protests, more than 3,000 people were arrested in connection with these riots. Regarding the style of how these people were arrested, it was a standoff of the police and public. The average custodial sentence was 16.8 months for the jailed protestors and the courts issued approximately 1,808 years of sentences to rioters. The youngest defendant was 11 years and six months of age.

When it comes to the Turkish case, the BBC, Al Jazeera, CNN and many other reputable media channels have regretfully presented the news on Turkey as a "Turkish Spring in the making." From the very first demonstration, the international news channels were already reporting that the protestors were secular citizens who were fed up with the 'ruling Islamists' and that they were starting a revolution! Was that the reality?

On the day the demonstrations started, it was a peaceful protest against a reconstruction project for Taksim Square, mainly moving traffic underground and creating more pedestrian space. Protestors marched for two reasons; firstly, they were against an alleged shopping mall to be built in Taksim square. Secondly, they were protesting against the cutting of trees in this park. Prime Minister Erdoğan explained that none of this was planned, instead a cultural center would be constructed and the 13 trees from this park would be transferred and planted in another neighboring area.

After a couple of hours, the number of protesters increased both due to police intervention and the provocative false news shared on Facebook and Twitter. Vandalism was the unavoidable result of these manipulations; shop and restaurant windows were broken, banks broken into, cars and buses were set on fire and some demonstrators committed assaults on innocent people. Total chaos ensued.

The BBC reported that the demonstrations were peaceful in the beginning, but offered no coverage of the vandalism which followed. There is no doubt that BBC correspondents have taken an ideological position in their explanation of the Turkish happenings; but was the BBC aware of the position it had taken on during the first phase of protests. Yet, clearly those individuals who have been using Facebook, Twitter and even Instagram to incite disorder were the only sources used in the making of news for the BBC correspondents in Turkey.

A similar provocation via the Internet was a part of the Tottenham Riots case. The British police was reported to jail two Facebook users who had used Facebook "encouraging another to assist the commission of an indictable offence," one was 20, the other 21 years old. However, the possibility of imprisonment of those inciting unrest in Taksim Square, would of course be referred to by the international media as an example of 'Erdoğan's dictatorship'. That is certain. And finally here I am contradicting this and borrowing the exact expressions from the BBC's very own headlines on the Tottenham Riots that occurred two years ago when they claimed the usage of social media to incite protestors was "technology abuse"!