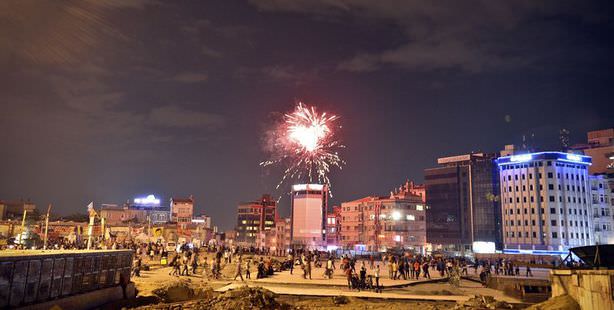 The sense of calm that has taken over outrage in Taksim’s Gezi Park since riot police were withdrawn from the historical square and park for which redevelopment plans sparked nationwide protests has fast turned into a festive atmosphere. While activists continue to stage a 24-hour watch over the symbolic Gezi Park, the Confederation of Public Laborers' Unions (KESK) staged a march yesterday in support.

As Turkey enters into the eighth day of nationwide demonstrations triggered by a redevelopment project which foresaw the removal of trees from Taksim's Gezi Park, protesters continue to gather at Taksim Square. On Monday evening, thousands flocked to Taksim at the end of the workday. The atmosphere of calm prevailed through the night. Protesters, who spent the night in the park, began the morning with a breakfast of pastries, cheese, milk and biscuits and then proceeded to clean the vicinity. Some protesters checked identification cards of journalists reporting the event. Having announced a two-day strike, the Confederation of Public Laborers' Unions (KESK) as well as other offshoot unions staged a rally in support of the protests. Demonstrators gathered in Galatasaray and marched up İstiklal Street. Chanting in solidarity for the resistance which began in Taksim and for the government to resign, the activists made an announcement when they reached Gezi Park. Attorneys and civil servants gathered at the Istanbul Judicial Palace in Çağlayan where they clapped in support of the demonstrations. Wise Persons' Committee Mediterranean Group member Kadir İnanır released an announcement stated, "The use of force should never be the stance taken against masses who are mobilizing in demand of democratic rights."

Contrary to the calm in Taksim, protesters and police clashed in Gümuşsuyu and Dolmabahçe. A group of 200 demonstrators marching to Dolmabahçe set up a barricade and threw percussion bombs, stones, fireworks and torches at police who responded with tear gas. Protesters also rolled out 19-liter water bottles on police. The gas used by police was felt all the way in Taksim Square. One policeman ended up with a broken arm and another was traumatized by the gas in last night's events. Fifty demonstrators were arrested and protests went on into the early morning hours.

The Istanbul Governorship has announced that police only intervened on groups that disrupted public services. The 261 individuals detained thus far have been released. The Istanbul police were also warned against possible provocations by certain activists that looted stores selling police gear.
Meanwhile, AK Party's Güngören District Chairman Abdullah Başçı, who was stabbed in the neck by a demonstrator in Merter on Monday, is stated to no longer be in a life-threatening medical condition.

Health Minister Mehmet Müezzinoğlu has announced, "There are 69 wounded, ten of which are receiving intensive care, throughout the country. In Istanbul 17 and in Ankara nearly ten ambulances have been destroyed. I believe that this period will be overcome through remaining level-headed."

Interior Minister Muammer Güler released the following figures regarding the nationwide protests: "Four inspectors have been tasked with looking into allegations police have used excessive force. Approximately 603 various demonstrations have been staged in 77 different provinces. A total 280 business locations, six public buildings, 103 police vehicles, 207 private vehicles, a residence, a police department building and 11 AK Party service buildings have been harmed in the protests."

This is a translation of an article originally written by Barış Sozal, Emir Sömer and Mustafa Kaya.