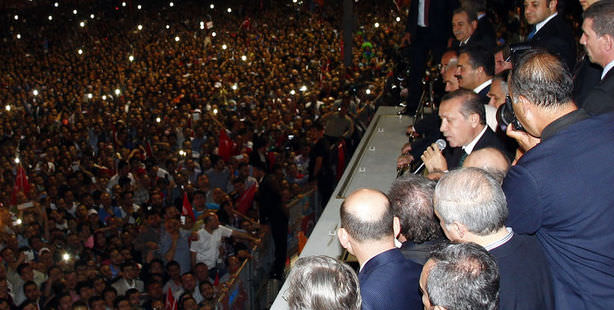 Upon his return from a concise three-nation North Africa tour, Prime Minister Erdoğan was greeted by tens of thousands of supporters welcoming his arrival to Istanbul.

Supporters flocked to Istanbul's Atatürk Airport in the dozens of thousands to welcome Prime Minister Recep Tayyip Erdoğan upon his return to Istanbul from a North Africa tour which coincided with ongoing nationwide protests which were sparked by a redevelopment plan for the city's historical Taksim Square.

Erdoğan arrived at approximately a quarter to two am on Friday and was greeted by an overwhelming display of support which also included the presence of many of his cabinet members. Addressing the crowd from the top of a bus, Prime Minister Erdoğan delivered a historical speech during which he relayed the following messages:

* "I greet every single person who breathes in every village and every city of the Turkish Republic. May God make your brotherhood immortal.

* We have gotten this far despite the interest lobby. This interest lobby thinks they can threaten us by bringing speculations to the stock exchange. If the general manager of a bank stands beside vandalism, then they will find themselves against us.

* Someone said, 'We will be able to do what we couldn't in the polls outside of the booths.'

* For less than 15 trees in Gezi Park, three lives have been lost. The death of my police officer is just as important as how saddening the deaths of two youths are.

* They say, 'pull back the police', however the police were doing their job."

This is a translation of an article originally written by Mesut Er, Serdar Canıpek, Cevdet Özdemir and Barış Sözal.