“I want you to give them their first lesson at the ballots.” 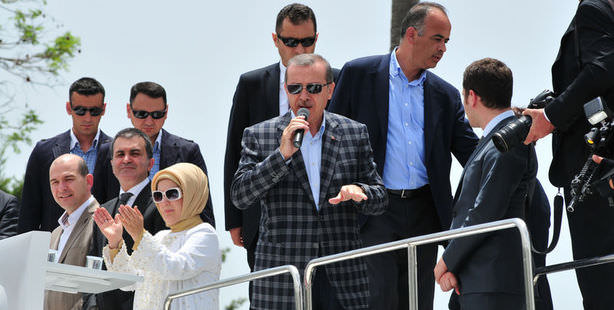 Prime Minister Recep Tayyip Erdoğan addressed citizens that flocked out to greet him in Adana.

The following are a series of excerpts from Prime Minister Recep Tayyip Erdoğan's address in Adana on Sunday: "As long as you continue to walk with us on the road of the people there will be an upright standing AK Party government. With God's permission your Prime Minister will not be daunted by anything. In this world we are only indebted to our Lord and no one else. We said we were the servants of the people. We were never the party of the 50% we were always the party of the 76 million.

The beloved youth, stand up straight, do not become stubborn! We will not do what was done by those few marauders. They will burn and demolish… that is the essence of marauders anyway. They will burn and demolish the property of the public. They will scatter the property of civilians and shop keepers. They are vile enough to curse at the Prime Minister of this country! If you believe in your beliefs, do not fear your freedom of belief. If you believe in your thoughts, do not fear your freedom of thought. If you are an environmentalist, this country has an environmentalist Prime Minister, you can come and address the Prime Minister with your views. No one can give lessons on environmentalism to a government that has planted 2 billion 800 million trees in this country within two2 years. They have probably never been to Gezi Park in their lives. They wouldn't of even known about Gezi Park before these incidents. But I was born there.

There are seven months until the regional elections. I want you to give them their first lesson seven months later at the ballots. There are those that cannot digest the growing and strengthening of Turkey.

Ask those that get by as environmentalists; How many trees did the parties of your allegiances plant?

Do not give those that want to plant the seeds of separation an opportunity. We will travel from door to door. I want a special effort from our female and youth friends. With God's permission March 2014 will change many things. The representatives of the main opposition that don't know their place go out and attack my police. They insult my police. Whose police is this? They are Turkey's police, these police belong to these people. They made a martyr out of one of our chief super intendants. They didn't learn the morals from their etiquettes and they post tweets; they are taking revenge for those who died in Hatay they say. Were we supposed to leave these squares to terrorists and anarchists? The police are struggling against this.

I will come to Adana to conduct our colossal Adana meetings. This was just a manner of salutations as I passed by."