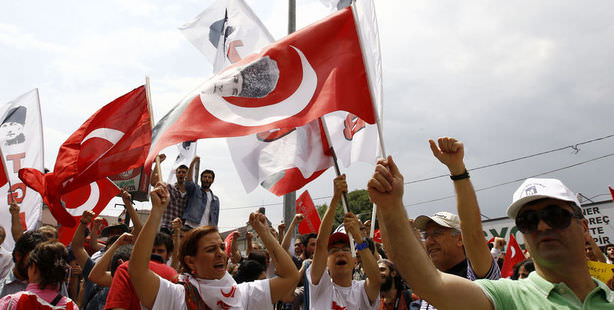 A group that alleges a United States Embassy is planned to be built on the Atatürk Forest Farm (AOÇ) property staged a demonstration on Sunday.

A group, alleging that a United States Embassy will be built on the Atatürk Forest Farm plot (AOÇ) in the capital, staged a demonstration on Ankara's Çiftlik Avenue on Sunday waving Turkish flags, posters of Atatürk and streamers.

The group chanted slogans against the government and the United States and in solidarity with the Taksim Gezi Park protests held a moment of silence for Abdullah Cömert, a citizen who was killed in demonstrations in Hatay, as well as sang the national anthem.

The group later dispersed in order to participate in demonstrations in Ankara's Kızılay neighborhood in yet another show of support for the Gezi Park protests.