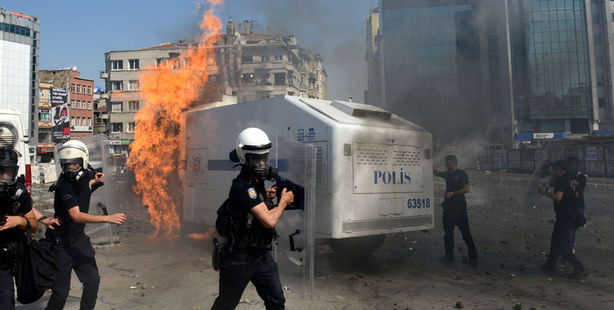 Police teams have removed the barricades set up by protesters on streets leading up to Taksim Square. While there are no plans to intervene on Gezi Park, police are using tear gas to intervene on groups that are resisting warnings.

Teams from the Istanbul Police Department entered Taksim Square at 7:30 am on Tuesday. Groups of demonstrators gathered around the barricades set up leading to the square and attacked police with stones and ball bearings.

Police approached the square from Gümüşsuyu Avenue and shortly after secured control over Taksim Square and the Republican Monument. Police proceeded to remove the posters and banners put up on the monument of Atatürk and hung from the Atatürk Culture Center (AKM). Municipality workers also began cleaning the square.

Police teams that arrived to Taksim Square have used megaphones to periodically announce to those in Gezi Park that police will not be intervening in the park and those there will not be subject to removal. Police appealed to the protesters not to throw rocks, calling from loudspeakers, "Dear Gezi friends. We are unhappy with this situation. We don't want to intervene. We don't want to harm you. Please withdraw."

Demonstrators ran to Tarlabaşı Boulevard from where they attacked police with stones, Molotov cocktails, ball bearings and fireworks. Police riot intervention vehicles (TOMA's) proceeded to extinguish vehicles set on fire by activists. Certain demonstrators were seen attempting to provoke police in what appeared to be attempts to push the police to stage an operation on Gezi Park. Police are continuously making announcements to those inhabitants of Gezi Park, requesting that they not be influenced by any attempts at provocation. Meanwhile, developments continue to ensue in Taksim Square and its surrounding vicinity.

Riot police have come out in throngs and are waiting in front of the Süzer Plaza on Gümüşsuyu Avenue. Police officers are being transported to the area by nearly 20 riot police buses and other public buses. Police are seen outfitted with helmets and shields as they remain positioned and are establishing widespread security measures in the region.

In a written statement, Istanbul Governor Hüseyin Avni Mutlu announced that there would be no operations staged against those in Gezi Park and stated that the police's sole intention is to remove the posters and banners hung up on the Atatürk Culture Center and on the Atatürk Monument in Taksim Square.

On his Twitter account, Istanbul Governor Mutlu wrote, "WE WILL DEFINITELY NOT TOUCH TAKSIM OR GEZI PARK. WE WILL ABSOLUTELY NOT TOUCH YOU. This morning and from here on out your safety will be secured by your police brothers. I want to especially request that you distance yourselves from any potential errors and are not subjected to any provocations and remain waiting calmly wherever you are.

As for you, the youth that are just trying to express yourselves, remain together with security forces during this operation which will ensure the realization of your ideals and wait in Gezi Park. Efforts related to these statements are currently ongoing. I want to thank the youth that are waiting in Gezi Park. There have been a few small-scale conflicts, however don't be worried," stated Mutlu.

Interior Minister says efforts are to bring life back to normal

Interior Minister Muammer Güler announced on Tuesday that the entrance of police into Taksim Square was intended to return life in the metropolis back to normal.

"There is no way we can tolerate attacks such as burning tires, throwing fireworks and Molotov cocktails and even using ball bearings. We are absolutely not intervening in legitimate demands for rights nor are we staging an operation on Gezi Park," stated Interior Minister Güler.

Responding to reporters' questions in the Assembly, Interior Minister Güler noted that a majority of the protests over Gezi Park which have been ongoing for 15 days have been within legal limitations and geared towards demanding legitimate rights and said, "We have tried to tolerate these protests seeking rights since the start and limited to Gezi Park, however the occupation of the Atatürk Culture Center and the hanging of banners for illegal organizations as well as the placement of signs and banners for various groups on the Atatürk Monument has led to a variety of perceptions in the public and has caused strife between the groups themselves."

Güler also pointed out that the roof of the Atatürk Culture Center poses a risk of collapse and stated, "That is a public institution. There is no way that the occupation of a public institution can be allowed."
There are over 20 barricades set up on roads leading to Taksim Square which has affected public order, commerce and traffic and has resulted in a high number of complaints from citizens and tourism operators said Güler explaining that today's measures were an attempt to restore normal daily life in the city.

"They say the prime minister is rough. So what was going to happen? Were we going to kneel down in front of these (people)?" Erdoğan said after the action started. "If you call this roughness, I'm sorry, but this Tayyip Erdoğan won't change," said the Prime Minister in response to intervention by police in Taksim Square.

Prime Minister Tayyip Erdogan called on the demonstrators to leave Taksim Square and the nation's streets in what he said were a "comprehensive attack against Turkey," to a parliamentary group meeting of his AK Party. "The increase in interest rates, the fall in the stock markets, the deterioration in the investment environment, the intimidation of investors - the efforts to distort Turkey's image have been put in place as a systematic project," Erdoğan said. "There have been acts of violence in many cities throughout Turkey by those who have camouflaged themselves behind the Gezi Park protests," said the Prime Minister adding, "I call on all activists to see the big picture, comprehend the plot and withdraw from the streets."