82% of the Turkish public are against the protests 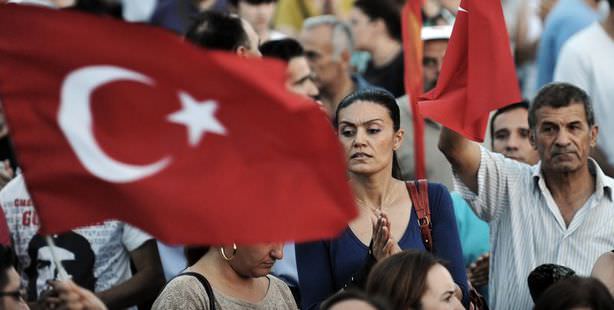 A survey conducted by ANDY-AR in 21 provinces shows that only 24.3 of the population supports the Gezi Park protests while an overwhelming majority now wants them to come to an end.

ANDY-AR Social Research Center has prepared a survey intending to establish how the public views the Gezi Park protests which began in Istanbul and quickly spread throughout the country as well as how the developments have affected political trends. The survey was conducted between the dates of June 5-10, by polling 3,700 people from a total 21 provinces.

When asked if they were aware of the incidents surrounding Gezi Park, 92.8 percent of participants responded 'yes' while 7.2 percent said 'no'. Out of those questioned, 6.3 percent said they have never been to Gezi Park. When asked the question, "Do you support the protests for Gezi Park?" 52.5 percent wrote down 'no' while 24.3 percent said 'yes', 16.4 said 'no comment' and 6.8 percent wrote down 'partially'. While 75.1 percent of those polled, said they have not been involved with the protests in anyway, 12.8 percent responded by stating, 'no comment' while 12.1 percent responded that they have participated.

Participants were also asked whether they support the continuation of protests, to which an overwhelming majority at 82.8 percent said that they are not in favor of demonstrations continuing. Out of the remaining polled, 9.7 responded 'no comment' while only 7.5 percent expressed that they would like the nationwide protests to continue.

IF THERE WAS AN ELECTION…

The final question in the survey asked participants, "Which party would you vote for if there was a parliamentary election this Sunday?" At 49.6 percent, the majority of respondents chose the ruling Justice and Development (AK Party). Main opposition Republican People's Party (CHP) came in second with 23.3 percent. The Nationalist Movement Party (MHP) was third with 15.9 percent and the Kurdish nationalist Peace and Democracy Party (BDP) was favored by 7.5 percent while 37 percent of participants wrote down 'other'.