PM Erdoğan: "We will meet in the middle” 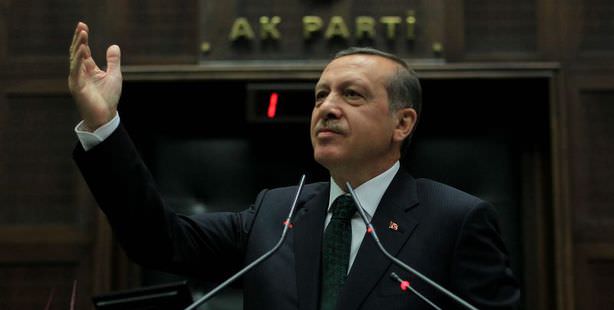 “No one has the right to try to alter the nation’s sovereignty,” stated Erdoğan adding, “We will meet at a middle point. I am inviting those that are sincere to withdraw from the protests."

Prime Minister Recep Tayyip Erdoğan devoted an entire hour-and-a-half ruling Justice and Development Party (AK Party) Group meeting to discuss the Gezi Park protests. Noting that the protests, which started in Taksim and then quickly spread to cities nationwide appear, to be organized as if by someone pressing a button, Prime Minister Erdoğan said that Turkey's stability and image was being targeted. "No one is trying to meddle in anyone's lifestyle, nor is anyone imposing certain values. We will meet in the middle," was one of the many messages Prime Minister Erdoğan delivered yesterday in his address.

The following are a series of excerpts from Erdoğan's Tuesday speech at the AK Party group meeting:

* "We have never been the type of party to become obstinate with other segments of society. Even though we have come to power through the votes of 50 percent, we have always considered ourselves to be the party and the government of the 100 percent.

* We have been analyzing every aspect of these protests which have been ongoing for two weeks now. We are looking into what the impetus was that drove our people to demonstrate, what people are actually saying on the streets and why certain youths have reacted in this manner.

* At this point, we cannot allow the stalk to mix with the straw. We will not make impositions on anyone nor will we allow anyone else to do so.

* The events of the past two weeks can not be interpretted as environmental sensitivity. First of all, what started due to 'environmental sensitivies,' has as of today unfortunately left four lifeless bodies behind. The Turkish economy has become the direct target of these events. The international press and international circles have systematically disinformed and with the entrance of international press establishments have staged a comprehensive attack against Turkey.

* Those using the Gezi Park protests as an excuse have stooped so low as to burn the Turkish flag or to hang illegal scraps and divisive posters on a state institution or in Taksim Square. They say the prime minister is rough. So what was going to happen? Were we going to kneel down in front of them to say 'please take down those scraps from the Atatürk Culture Center (AKM)?' I'm sorry, but the Gezi Park is not an area to be occupied.

* The protests in Gezi Park are being utilized extremely systematically to cover up chaos. There are intentions in Turkey to play a great game. Certain people want to slow Turkey down and are doing so by placing a tree on the packaging and presenting it as environmental sensitivity. I am especially calling on the protesters in Taksim to see how they are being used.

* As for the youth between the ages of 20-25 who had never experienced a Turkey prior to the AK Party… I love you in the name of God. We truly took on a Turkey in extremely difficult conditions. The opportunities our youth has today are opportunities they couldn't have even dreamed about 10.5 years ago.

* Does a young girl not have the right to study because she wears a headscarf? Unfortunately, during these protests, the daughter-in-law of a close acquaintance was made to grovel with her six-month old child. They harassed her and her child. Now what does this have to do in any way with the fight for freedom?

* We have never pursued revenge. We do not and will not meddle in anyone's lifestyle. Nobody imposes on others, nor will they. We will meet at middle points.

* Those who go by the title of actor, professor, journalist or writer, as well as some politicians, should immediately refrain from planting seeds of discrimination in society.

* Turkey is nearing putting an end to terrorism and is walking successfully on the path to a solution. Just as Turkey is about to rear up, these sorts of events begin to surface. These recent events are unfalteringly the same trap that was set up for the late Menderes prior to May 27, 1960.

* In a number of cities, CHP (the main opposition Republican People's Party) municipalities received the illegal protesters that burned and demolished in their wake with open arms. I am calling on the CHP Chairman to resign not only for his connection to the Reyhanlı incidents but also for dangerously provoking society.

* What has transpired in Turkey has become a clear test for the nation's friends and foes. These protests have revealed where everyone stands.

* It should be made known that no one has the right to try to disrupt the nation's sovereignty. To overthrow an elected government and to disregard the results in the poll booths is a habit from the past and has no validity today.

* I want to especially distinguish between the youth that I accept having taken part in protests in Taksim as well as a number of other areas with sincere sentiments, and say, 'Put an end to this.' However, as for those intending to continue terrorizing these protests, I say, 'It is now over. From here on out, we will no longer put up with this."